Jessica Sanchez hopes to make it to The Grammys someday

Jessica Sanchez has her hands full with an upcoming major concert, a solo album, and her acting debut in a hit TV series. 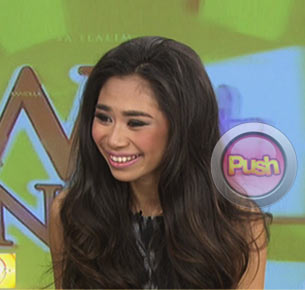 After placing first runner-up in American Idol Season 11 last year, Jessica Sanchez shared on Bandila’s February 11 episode that she is now living her dream. “This is what I’ve always wanted to do, and I’m doing it [and] I’m here with you. [It’s] so much fun,” the Filipino-Mexican singer told Boy Abunda in the Ikaw Na portion of the late-night news program.
Jessica is currently in the Philippines to stage her first major concert on Valentine’s Day, February 14, at the Big Dome. Asked how she feels that her first-ever major concert is taking place in her mom’s hometown, Jessica answered, “It’s overwhelming. I’m nervous but I’m very, very excited that it’s taking place in Manila. I just hope all of my supporters would come.” She stated that she will be doing a lot of love songs during her concert and will sing the Tagalog song, “Ikaw.”
Jessica described becoming famous as unexpected and “crazy.” “I heard about it, but seeing it is a different kind of thing and like experiencing it,” she said.
She related that the first time she came to the country last year, she felt “weird” when she saw the warm reception of Filipinos. “When I got off the plane, there were like cameras and people and it was just like overwhelming. I was like, ‘Oh my gosh, what’s going on?’”
Jessica is also trying to deal with becoming a celebrity the best way she can. “This is what I really, really wanted to do my whole life and it makes me feel good that I inspire these people,” she said. The former Idol contestant further added that sharing herself with her fans is one of her goals in becoming a singer.
Jessica recently finished recording her launching album which will be out in the market soon. Since the Grammy Awards for this year just ended, Jessica mentioned that it is also her dream to make it to the prestigious music awards in the US. “A lot of people don’t know this about me, but I’m very fierce when it comes to my career. That is really one of my goals and I’m really, really going to make it happen,” Jessica said referring to The Grammy Awards.
Although she started singing at the age of two and started joining singing competitions at seven, Jessica said that there never was a time when she felt that she wanted to give up singing. She said that she would get really nervous and would start shaking before a performance every time. “But when I’m on stage, I’m like boom… like I’m home.”
Apart from her upcoming concert and an upcoming album, Jessica added that she will also try acting and will make a guest appearance on the US hit TV show, Glee. “I will be acting. I’ve been taking up acting classes. I’ve never acted before so it’s like a brand new thing to me.”
She shared that her ultimate dream is just to make music for her supporters. She also has a lot of other goals, like making it to the Grammys, going on a world tour, and selling records.
As for the most important song for her, Jessica answered, “I Will Always Love You” by Whitney Houston, whom she looks up to. She added that she has been singing the said song since she was a kid.
As for her upcoming album, Jessica said that her fans can expect youth-friendly and radio-friendly songs. In the album, she said that there are a couple of ballads but there are also upbeat tracks to showcase a new side of her.
Celebrity