Heart on walking down the aisle with Sen. Chiz: 'Now's not the time to get married' 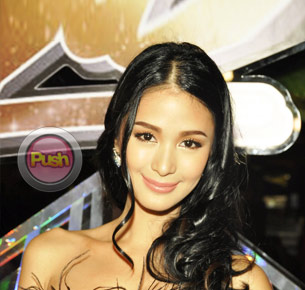 Despite being plagued by rumors of settling down with her boyfriend Sen. Francis “Chiz” Escudero, actress Heart Evangelista appears to be in no rush to tie the knot.

The 28-year-old actress has made her feelings about marriage quite clear in a taped interview aired on Buzz ng Bayan on Sunday.

“I’m a very open person. I would definitely let the fans know but at this point now’s not the time to get married,” said she.

Her fans need not fret though because Heart is not completely dismissing the idea, saying that, “But you know I mean okay lang sakin kung ikakasal ako. I’m 28.”
Her relationship with the lawmaker, who is 16 years her senior, has been made official July 31 last year. And to say that their coupling has had a couple of naysayers would be an understatement as even the actress’ own parents, Rey and Cecile Ongpauco have been very vocal about their disapproval over their daughter’s latest romance.
In relation to rumors of their supposed wedding, which began early this year, Cecile surmised in an earlier Push.com report that Heart won’t be ready for the kind of life that she would have should she wed the senator.
"Hindi pa siya handa maging isang asawa ng isang politician na napakatanda sa kanya. Hindi naman sanay si Heart sa gawaing bahay. Baby ’yan overprotective na sheltered masyado," said Heart’s mother.
She also presupposed that Heart and Chiz won’t be able to wed in church given that the senator was only annulled in court from his ex-wife Cristine Elizabeth Flores and not in church.
Meanwhile, notwithstanding her parents’ request to break up with Sen. Chiz months ago, Heart stood her ground and maintained that she is happy with him.
In her Buzz ng Bayan interview, Heart enumerated what she loves most about the senator.
“I appreciate him kasi when it comes to my dressing up. When it  comes to my past relationships and the stupid things I’ve done in my past which I’m very open to him about, my escapades or whatever. He’s very open-minded and it made me who I am so okay siya don,” Heart shared.
To this day though, Heart revealed that she and her mother have yet to reconcile after their falling out.
“Actually I don’t really get to speak to my Mom at all, my Dad I get to say hi to him. We’re still not there yet,” she said.
Celebrity