Anne may have received a major backlash online, but she did receive ample support from other showbiz personalities amid the recent controversy that she's facing 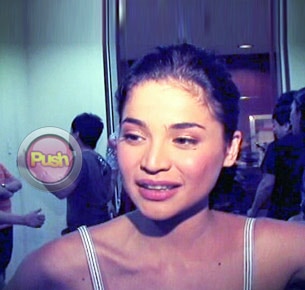 Anne Curtis' public admission and apology regarding her recent bar meltdown has seemingly done her all the good as far as gaining supporters from her colleagues in showbiz are concerned.
While many Netizens have visibly expressed their dismay over the actress' recent misbehavior which reportedly involved slapping box office actor John Lloyd Cruz and berating Kapamilya host and model Phoemela Baranda, her It's Showtime family has remained solid in lifting her up in the aftermath of this controversy.
Host Kuya Kim Atienza claimed that they are also "hurting" because Anne is hurting.
"Si Anne kasi totoong tao 'yan eh. We're with her and we're beside and andun ang suporta namin sakanya. Baby namin 'yan eh. Kung nasasaktan man siya eh nasasaktan rin kami," said he during a taped interview aired on Buzz ng Bayan on Sunday.
He added however that Anne is "dealing with it quite well."
Dancer Jhong Hilario on the other hand had a message to those who have been judging the The Gifted star.
"Kilala namin si Anne so please 'wag nalang nating husgahan. Hindi natin alam kung talaga ang totoong story," said Jhong.
Meanwhile, Vice Ganda lauded Anne for her exceptional professionalism and absolute love for her craft and her supportive fans which has become apparent amid this issue.
He shared, "Nakikita niyo naman pumapasok parin sa Showtime, nagpapatawa at nagbabaliw-baliwan. Although naaapektuhan siya, naaapektuhan siya, pinipilit niyang maging professional sa lahat. She's doing a great job. Kaming magkakapatid sa Showtime hindi namin siya binibitawan."
According to reports, a drunk Anne not only slapped and berated her co-Kapamilya talents but also two non-showbiz personalities.
According to Ruffa Gutierrez, all the individuals involved in the raucous are either her friends or she's acquainted with. But she claimed that, after all that has happened since the incident went public, she couldn't help but feel her heart going for the AnneBisyosa performer.
Saying that Anne doesn't "deserve" all the flak she's been getting of late, Ruffa reminded the public that, "She already asked for forgiveness, tinanggap naman ng all parties involved so tapos na. Let's just hope and pray that Anne rises above this kasi pinagbirapan niya ang pangalan niya."
Celebrity