Ai Ai on the possibility of being friends with Jed: 'Siguro pagdating ng panahon. Siguro mga five years or 10 years from now, baka' 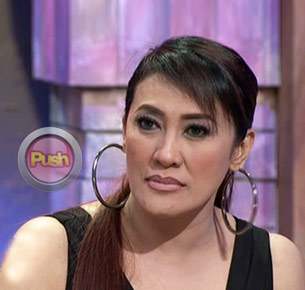 At 49, comedienne Ai Ai delas Alas is still learning things as she go through the events in her life, particularly and more recently, her failed marriage with her now estranged husband Jed Salang.
Ai Ai who has done a complete 360-degree turn from being a smitten woman to a battered wife had previously filed a case against Jed for the violation of the Anti-Violence against Women and Their Children Act of 2004.
The veteran actress' has tied the knot with Jed in Las Vegas last April 3 only to decide to break it up with him on May 2 after claiming in a tearful interview with The Buzz that she was physically abused by her new husband.
Asked what she has learned from her controversial marriage, Ai Ai during an appearance on Sunday’s Buzz ng Bayan said, "Not to be too trusting."
According to her previous interview, Ai Ai revealed that part of what she and Jed argued about that eventually led to their physical altercation was how the latter wanted to celebrate their first month as husband and wife in a casino, something which she didn’t agree with.
Ai Ai however recognizes the fact that she also had her own share of shortcomings that needs to be changed should she start a relationship with someone new.
"Kagaya ng parati kong pagkakamali, reactionary kasi ako eh. Madali akong mag-react eh. Kunyari galit, maigsi ang pasensya ko. Tapos may nasasabi akong hindi maganda or masakit, hindi ko na mabawi. Ngayon, na-realize ko, kapag galit na galit ako, Jesus, Jesus mga 10 times. Kasi dadating ang time na kapag may sinabi ka sa kapwa mo at nasabi mo na, hindi mo na mababawi, ” she explained.
More importantly, Ai Ai stressed that it's crucial to be mindful of your partner's emotions when in a relationship.
"Tsaka sabi ko next time, kung sino man 'yong swerte, 'yun 'yung una kong gagawin. Hindi na ako magsasalita or iisipin ko 100x bago ko ibuka 'yung bibig ko and I think it's maturity na kapag ganon," related the actress.
To give update to her fans, Ai Ai shared that her case against Jed is still ongoing.
“Bawal sa aming mag-usap, bawal sa aming mag-text or anything," she shared.
But is she open to be friends with him, say int he future?
"Siguro pagdating ng panahon. Siguro mga five years or 10 years from now, baka,” Ai Ai ended.
Celebrity