Baron Geisler on being part of two MMFF films: 'I feel positive about the future'

Baron Geisler admits he is more mature now and willing to change. 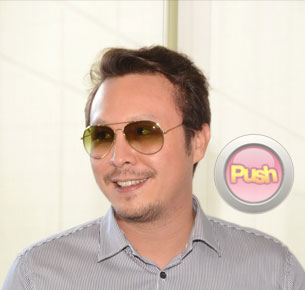 In this year's Metro Manila Film Fest, actor Baron Geisler said he is lucky to be part of two films, Saka-Saka the film festival's New Wave category and Boy Golden for the mainstream films category. “I feel blessed. I always want to thank Governor ER Ejercito for including me kasi ako na lang natira sa grupo eh, sa Asiong Salonga at saka sa El Presidente ako na lang natira sa mga past movies na ginawa niya. Sinama niya ako dito sa Boy Golden and so I was working with KC Concepcion and Governor ER so for sure it will be a blast working with them,” he said of the two action films during the MMFF New Wave Films presscon held last December 6 at the Sequioa hotel in Quezon City.
The controversial actor also weighed in on the guilty verdict that came out of the case Patricia Martinez (eldest daughter of William Martinez and Yayo Aguila) filed against him for acts of lasciviousness in 2008. “I cannot comment on that. Hindi pa naman siguro tapos. So we will still try. Siguro I will try and talk to my lawyers muna. Wala pa akong balita so right now I'm waiting lang. But you know I don't let it affect me, tuloy-tuloy lang, focus pa rin. It's too soon to say anything. Ako i'll just keep quiet na muna and let's see. Hindi pa naman tapos. Kung lalaban, lalaban pa rin naman. I'll call my lawyer and ask kung ano bang dapat gawin,” he shared.
The 31-year-old actor said he has had some realizations this year which has given him a new perspective in regards to his career and life in general. “Kasi time is running and I'm not getting any younger so I really need to focus on this career that I chose and it’s not the awards anymore eh. It’s more of like this is my bread and butter so I should really take good care of it. Kailan ko lang na-realize yun. Kailan lang kasi ako nag-mature siguro. Kasi back then 12 years old, naka-program ata sa pagiging 12 years old yung utak ko eh. So now I'm taking responsibility for my actions and basta everything's going to be all right. I feel positive about the future,” he said.
Watch Saka-Saka at the MMFF's New Wave category from December 18-24. The film also stars Ejay Falcon and Joseph Marco. For more Kapamilya updates, log on to Push.abs-cbn.com and follow Push_Mina on Twitter.
Celebrity