Psychics: 2014 would see breakups and reconciliations in showbiz 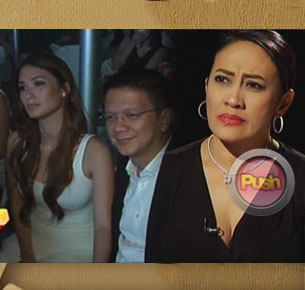 With 2013 set to close in two days, top celebrity psychics have taken their time to dish out how the upcoming Year of the Horse would fare for the celebrity couples whose year have been ridden with controversies, heartaches, and dilemmas.
Ai Ai delas Alas and Jed Salang
According to psychics Madame Suzette Arandela, Stargazer, and Rene Mariano during their appearance on Buzz ng Bayan on Sunday, estranged couple Jed and Ai Ai won’t get back together this year.
But Madame Suzette adds that there is a possibility for Ai Ai to forgive Jed. As for their ongoing divorce case, Stargazer predicts that it would see delays but Rene claims that it would push through nonetheless.
Recall that the veteran actress has tied the knot with Jed in Las Vegas last April 3 only to decide to break it up with him on May 2 after claiming in a tearful interview with The Buzz that she was physically abused by her new husband.
Sunshine Cruz and Cesar Montano
Celebrity psychic Rene deems that Sunshine will no longer get back with the Cesar this 2014. He adds, “Maaari silang magkasundo pero hindi ko masasabi na close friends. Kung hindi bilang ama at ina ng kanilang mga anak.”
As for the Galema star, both Stargazer and Madame Suzette foresee that she can find new love this year. However, not a very positive vibe surrounds Cesar this 2014 according to Stargazer saying that, “Pero si Cesar would be iikot ang controversy kay Cesar [pwede] sa love life o sa decorum niya o basta sa kahit anong gagawin niya sa public.”
It may be recalled that when news of their separation made rounds early this year purportedly because Cesar has been having an affair with starlet Krista Miller.
Angel Locsin and Luis Manzano
While many fans are probably wishing for them to rekindle their romance, all three psychics unanimously claimed that Angel and Luis won’t start yet another chapter in their lives as a couple. However, without naming names, Stargazer underscored that she sees that someone from Luis’ past, whom he really loves, would eventually get back with him.
Talks of Angel and Luis’ reconciliation were spurred by the coinciding announcement of their breakup with their respective partners – Luis with Jennylyn Mercado and Angel with Phil Younghusband.
Heart Evangelista and Sen. Chiz Escudero
One of the celebrity couples whose relationship was put to the test this year was that of Heart and Sen. Chiz and according to Stargazer, a hard year awaits them anew this 2014.
“Si Heart at Chiz paninindigan nila ‘yan eh ang question lang may mag mamatigas. The mother would still stand her ground,” said she pertaining to Heart’s mother Cecilia Ongpauco, who has been very vocal about her disapproval for the lawmaker.
Madame Suzette on the other hand deems that 2014 would be blissful for the couple even saying that “Sa nakikita ko, magiging masaya ‘yung dalawa. Sila na talaga. ‘Yung nakikita ko rin ay magkakaroon ng reconciliation between her and her parents.”
Rene however brazenly puts his name at stake just to assert his prediction that “hindi sila magkakatuluyan in any other year.”
Maja Salvador and Gerald Anderson
Another couple who weathered a lot of controversies not to mention bashers this year was Maja and Gerald and both Madame Suzette and Stargazer foresee 2014 to also be especially far difficult for the former.
“Maja will have a very difficult year next year and with that maraming intrigues na ibabato sakanya at nakapalibot sakanya,” claimed Stargazer.
As for Gerald, Stargazer says he would be showered with new blessings but along with it would come other things.
“Si Gerald kasi since it will be a year of new projects and new beginnings maraming gagawin marami ring babae. Marami ring magkakagusto. Kasi alam mo sa sobrang gwapo ‘yan ang mahirap eh maraming magkakagusto even secretly ‘yung friend mo o ‘yung bestfriend mo. Kaya ang nafe-feel ko sa nangyari kay Kim [Chiu] at Maja alam ‘yon ni Kim na even nung magkaibigan tayo may secret [admiration] kana,” said she pertaining to the falling out of Maja with Kim because of her relationship with the Bukas Nalang Kita Mamahalin actor.
Meanwhile Madame Suzette predicts that Kim and Maja won’t be able to mend their ties this coming year.
Like Rene though she adds that the couple would eventually head to Splitville, “But ‘yung nakikita ko hindi magla-last ang relationship ni Maja at Gerald, it will be rocky. Hindi pa maghihiwalay pero maraming pagsubok. Magkakahiwalay parin in 2015.”
Sarah Geronimo and Matteo Guidicelli
The fact that they are yet to admit the real score about their relationship has put Sarah and Matteo on the controversial couples list. Despite their silence both Madame Suzette and Stargazer see a bright 2014 for them with the former even claiming that “Hindi pa handang aminin ni Sarah ang kanilang relasyon but secretly sila na.”
Celebrity