'Kimmy Dora: Ang Kiyemeng Prequel,' the last installment to the successful film franchise, is fast-paced and entertaining for all ages. 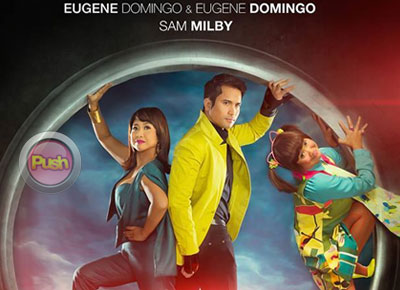 As the twin heirs of the Go Dong Hae empire, Kimmy and Dora return to the big screen in the third and last installment of the popular Kimmy Dora series. In Kimmy Dora: Ang Kiyemeng Prequel, Kimmy returns to the Philippines after graduating with top honors from Cambridge University in the UK. Luisito Go Dong Hae puts his daughters Kimmy and Dora in an internship program in their company to gauge Kimmy and Dora's strengths and potentials in taking over the Go Dong Hae empire one day. Eugene Domingo once again pulls off her dual roles with ease and makes the audience believe that the sisters are hilarious and relatable at the same time.
As the two women start taking on various jobs in the company, from parking attendant to food service crew, they are guided by Rodin Bartoletti (played by Sam Milby) who makes sure both heiresses are learning from their training. Both girls become smitten by their aloof yet irresistibly handsome trainer. Sam is dashing as the always polished Mr. Bartoletti and proves he has some martial arts prowess as well.
The Go Dong Hae empire is suddenly threatened by a terrorist named Bogart who wants to destroy their reputation. Kimmy and Dora suddenly go on the run to escape from the cops after being framed for murder. In the process, they end up discovering the dark secret in their father's company.
Kimmy Dora: Ang Kiyemeng Prequel is definitely the most fast-paced and action-packed of the series. As a prequel, it also shows off a more lenient Kimmy who is not yet hardened by years of being a top honcho at her dad's company.
The movie is very entertaining to watch, with elements of action and comedy combined. New cast members Joel Torre and Angel Aquino added depth to the story which ends in a surprising twist. Cameo appearances from celebrities like Piolo Pascual, Paulo Avelino, Mylene Dizon, John Lapus, Tuesday Vargas, Sam Concepcion, Zanjoe Marudo, and Dingdong Dantes also make the movie very enjoyable to watch.
For more Kapamilya updates, log on daily to Push.com.ph and follow Push_Mina on Twitter.
Celebrity