Jolo Revilla: Jodi is not pregnant 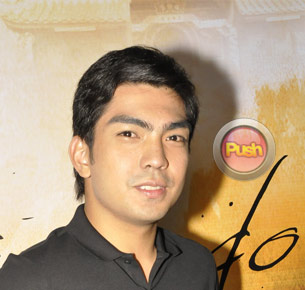 Jolo Revilla took to his official Twitter account to clear up rumors that he will soon be a father to Jodi Sta. Maria’s second child. The actress has a son nicknamed Thirdy with her estranged husband Pampi Lacson.
“She is not pregnant and we are not yet married. What we have right now is something special and we want to keep it private because I love her so much,” Jolo wrote.
The rumor came right on the heels of the announcement that Maya dela Rosa, the lead character of hit soap Be Careful With My Heart being played by Jodi, is pregnant with Sir Chief’s (played by Richard Yap) child after recently having their honeymoon in Japan. Jolo even added, “Kung sakaling totoo man 'yan, kayo po unang unang makakaalam. Godbless.”
While the couple has been very quiet about their relationship, Jolo admitted that they have been a couple since his acting stint on the now defunct series My Binondo Girl which aired in 2011.
Jodi for her part had been married to Pampi since 2005 until they decided to split sometime in March 2011. While Jodi has Thirdy, Jolo also has a son named Gabriel with Grace Adriano, the daughter of actress Rosanna Roces.
Celebrity