Judy Ann Santos looks at rumors in a positive light. 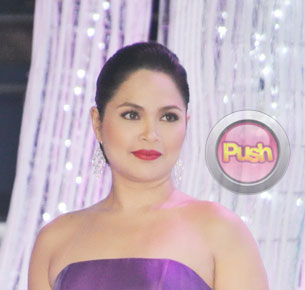 Instead of being peeved by rumors about her reportedly rocky marriage, Judy Ann Santos admitted she is actually happy that she remains relevant because of the intrigues.
According to rumors, Juday’s husband, Ryan Agoncillo, recently left their home and went back to the Agoncillo residence after fighting over an issue. “Wala, walang ganun at all,” Juday answered when asked about the rumor on the sidelines of the recently-concluded Kwento ng Pasko: Pag-asa at Pagbangon solidarity concert in Araneta Coliseum.
There have been many rumors, starting from Ryan’s supposed infidelity last January down to speculations of their annulment last April. Yet amid these issues, the couple has both been firm in saying that their four-year-old marriage is intact.”
But does these rumors affect their relationship in any way? “Deadma na, wala nang ganyang mga isyu. I’ve been hearing that… natatawa na lang kami,” the young superstar said.
According to the Bet On Your Baby host, although they have no idea who is behind these rumors, they are, in a way, thankful that these people are doing what they’re doing because “Sabi nga nila, kung may issue eh di masaya. Ibig sabihin, naiisip pa rin kami ng mga tao, so carry lang.”
Meanwhile, the star is in high spirits that her first ever game show is rating very well in its timeslot. Juday admitted she had qualms about embarking on this new chapter in her career as a host with her even categorically saying that it’s not her strongest point.
“Sobrang thankful talaga ang lahat ng staff and crew lalo naman ako. Sobrang thank you talaga na sinuportahan ng bonggang bongga ang Bet On Your Baby and pampagaang ng loob, pampawala muna ng problema. Pampawala ng bigat ng dibdib sa mga panahong ‘to. Good vibes lang,” she supplied.
With Christmas drawing near, the TV host-actress shared that in unity with the other Filipinos who are remembering the ones who perished and survived the fury of typhoon Yolanda in the Visayas last month, they would keep their celebration at its simplest this year. “Christmas plans... it will be simpler, pero most definitely it would be just us. Sa bahay lang…” she said.
She added, “As always, we’ll have our Christmas mass na ginagawa namin sa bahay every year.”
Celebrity