Julia Barretto on bashers of her pairing with Enrique Gil: 'Bakit ko papansinin 'yon when there are so many supporters and people who are so excited for Mirabella?' 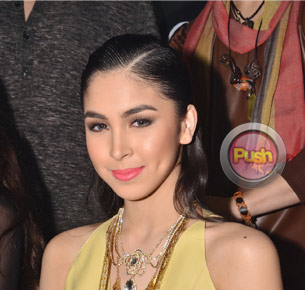 For someone who’s just about to be launched on Philippine TV through her first leading role, Julia Barretto is already getting more than her share of bashers this early in the process. The tirade of anti-Julia bashers began early this month when Julia’s leading men in the series Mirabella were changed, from Kiko Estrada and Diego Loyzaga to Enrique Gil and Sam Concepcion.
Most of the criticisms are apparently from fans of Enrique’s love team with Julia Montes, collectively known as JulQuens. With some of them actively taking their disappointment over Enrique’s new onscreen partner on various social media platforms, the press, during the recently-concluded Kwento ng Pasko: Pag-asa at Pagbangon: The 2013 ABS-CBN Christmas Special  solidarity concert held in Araneta Coliseum, asked Julia (Barretto) if she’s affected by the nasty bashing that she’s been receiving of late. “Okay lang eh, normal naman ‘yon eh. I don’t mind. Hindi po [ako na-hu-hurt],” she answered.
While many agree that fans are overreacting about the new love team, Julia said that, in a way, she understands that everything that she’s been experiencing is just part of being an artist. “Hindi na ako na-a-affect diyan, hindi ako nahu-hurt. First of all it’s normal na sa show business na magka-ganon [bashers]. Second of all, bakit ko papansinin ‘yon when there are so many supporters and people who are so excited for Mirabella? Mas binibigyan ko ng attention ‘yun,” she explained.
But does it add any pressure on her part to “create” chemistry with Enrique given that he came from a well-loved love team? “Wala naman sigurong pressure kasi actually the goal here talaga is for Mirabella to be successful and mataas ‘yung ratings and instead of feeling the pressure mas namo-motivate kami to do better and we’re so excited na mapanood ito kasi sobrang ganda talaga ng istorya,” she said.
How did she feel about this casting change? “Okay lang naman sa akin ‘yung changes and I trust the management and their decision po nila ‘yon so I’ll just support it,” she stated while adding, “They know what’s best naman.”
With Christmas coming up in a few more days, the 16-year-old star who is part of the controversial Barretto family, shared that she would be going out-of-the-country with her family during the holidays.
Does she have any Christmas or New Year’s wish for herself or her family?
“Well actually marami ngang napagdaanan ang family pero it didn’t affect me so much. I didn’t let it affect my career. Well, for 2014 sana magkaayos na silang lahat. I mean, they’re family so I believe that everything will be okay again… eventually,” she said.
Celebrity