Shamcey Supsup is excited about the grandest event in her life 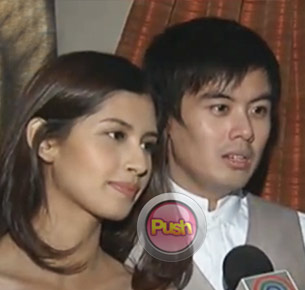 2011 Miss Universe third runner-up Shamcey Supsup will soon walk the aisle to become Mrs. Lloyd Lee.
The wedding is on December 29 at Church of the Risen Lord in Quezon City and more than a thousand guests have been invited to the affair. Shamcey added, “Do’n kami nahirapan sa guest list, pero okay naman. Actually nga, si Lloyd may sakit so sana by wedding gumaling na siya.”
Shamcey and her businessman fiancé Lloyd, gave Kapamilya viewers an exclusive peek to their first fitting of the gown and the suit they will be wearing during the wedding reception. Designer to the stars Francis Libiran shared his thoughts on his creations. “I made it nude, I want it to be sexy pa rin sa kanya e, beauty queen pa rin yung dating e. So, it’s different from her main gown, (it has a) slit in the front so she could do her tsunami walk. So for Lloyd naman, I did something in white, also more of like a brownish-toned color to complement the bride.”
Lloyd also shared that for the reception they will be occupying two hotel ballrooms. “Dalawa yung magiging ballroom na sakop, so kumbaga yung isa ginawa naming medyo classical para sa mga medyo formal na guests. Yung mga bata sa kabilang ballroom, medyo disco type.”
The theme of the wedding is pastel colors and bridesmaids will be wearing gowns in shade of orange.
Talking about the honeymoon, Shamcey said she requested their honeymoon be in Europe because she hasn’t gone there yet. However, they will wait until the Holy Week before they go there because of work commitments in January. She also said that they would wait two more years before they try to have a baby because they’re waiting for their home to be finished first.
Celebrity