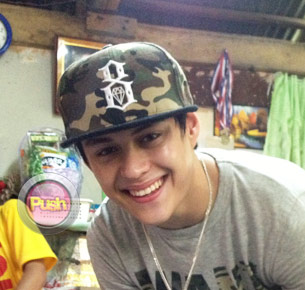 Enrique Gil admitted during his recently-concluded King of the Gil press conference that he hasn’t had any formal training when it comes to dancing. He shared that he only discovered his ability to dance after entering showbiz.
“Those who were not able to sing had to dance so after our launch on ASAP, I started to focus on dancing,” shared Enrique about discovering his dancing skills. “Mas na in-love ako [sa pag-sasayaw] when PBB housemate Mickey Perz became my partner; his moves were infectious, and then I became a part of a group (GiggerBoys) in ASAP. Our rehearsals served as dance workshops for me. The steps were really hard because I was not really into dancing before,” he said.
Enrique started carving a name for himself on the dance floor when he brought swag to a new level while performing the hits “Teach Me How To Dougie” and “Gentleman.” Now, apart from his improving acting skills, Enrique has gained recognition for being a dancer with some even dubbing him as the new “Dance King.”
“Actually hindi ko kinon-sider ‘yung ‘Dance King’ [na title] it’s more of I just want to try something new. Siguro dahil nakita na rin akong okay akong sumayaw dahil sa ‘Dougie’ at ‘Gentleman,’ siguro it’s about time for me to go out of acting and do a concert siguro. Hindi lang siguro ‘Dance King’ kasi gusto ko talaga all around eh. But if ‘yun ang mangyayari, of course, it’s an honor,” he said.
In a recent ASAP episode, Enrique even had a segment where he was tasked to teach a few dance steps to a couple of dancers while on air, a segment which was formerly done by dancer-actor John Prats.
Does this mean that he’s replacing him as ASAP’s Dance King? “Salamat siguro pero siyempre hindi ko mare-replace si John Prats. Siguro it’s also good to feel na ‘pag sumasayaw ako, it means something to other people. Hindi lang ‘yung basta sumasayaw lang ako, ‘yun bang gusto rin nilang matuto,” he quickly explained.
Meanwhile, with his first-ever dance concert titled King of the Gil happening on November 29, Enrique was once again pitted against his former Princess and I co-star Daniel Padilla who also rocked the Big Dome some six months ago with his very own concert.
"Well they can compare if they want, pero iba ang concert niya at iba ang concert ko. This is dance, it's different from what he's doing. Sa kanya, it's rock, banda so it's totally different genres. Pero concert pa din. We are just doing what we love to do, 'yun lang," he quipped. "Mine's totally different. I'm doing my stuff, he's doing his stuff,” he added.
According to Enrique, prior to taping Princess and I they were already briefed on the possibility of being compared to one another. True enough, the fans of both of young stars often go head-to-head in showing their support for their idols through social networking sites.
Do they even stop and discuss about the incessant comparison? "Di naman pinag-uusapan 'yun kasi sa start pa lang ng Princess and I alam na namin na ganito mangyayari. Tinginan lang kami and nagkakaintindihan na kami," he said.
If anything, the 21-year-old actor claimed that they remain good friends until this day even though they rarely see each other due to their respective tight schedules. In the end, Enrique shared that he would focus on gearing up for the concert soon as he comes back from his US Tour with other Kapamilya stars.
Enrique’s first-ever dance concert King of the Gil is happening on November 29 at the Smart Araneta Coliseum.
Celebrity