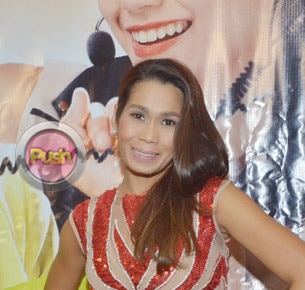 Pokwang remains proud of her dramedy (a combination of drama and comedy) flick Call Center Girl despite being just a second choice for the role that was originally intended for Sharon Cuneta.
In the recently-concluded blog conference for the film which launched in the cinemas on November 27, Pokwang revealed that she knew about the scenario. However, this news didn’t discourage her in accepting the project. "Ako naman, bilang maganda naman yung proyekto po eh, bakit mo tatanggihan, ‘di ba? Kung marami ka namang mapapasayang tao [bakit hindi?]," she enthused.
Call Center Girl director Don Cuaresma and writer Hyro Aguinaldo, who were both present during the blog conference, confessed that the script had to undergo a major revision when the lead role was given to Pokwang. The said revisions were so extensive that only the name of Pokwang’s character Teresa “Terry” Manlapat was retained. But Hyro quickly explained that the film’s new script was nevertheless “tailor-fit” for Pokwang’s dynamic character.
"Originally kasi drama siya, then nakita na potensiyal kasi siya sa comedy. Then minatch talaga in terms of humor and in terms of delivery sa personalidad or sa kakayahan ng mga comedian natin [sa pelikula], lalo na kay Mamang (Pokwang’s nickname),” he explained.
Director Don on the other hand, justified their sudden shift from drama to comedy. "One thing is, if you're going to make a movie about call center, it should be comedy. Baka mamaya maantok sila pag drama, hindi ba? From the Sharon Cuneta script, iniba talaga... 'pinkowangized' yung material para mag-fit sa kanya.”
He also underscored, that despite being a comedy, Call Center Girl has a big heart as it tackles and attempts to resolve the growing gap between a parent and a child due to certain unforeseen circumstances.
While tweaking the script involved a lot of work, director Don explained that Pokwang’s versatility as an actress came in handy for the writers. "I'm not saying Sharon does not do comedy, she is just not known for that. But Pokwang is an actress, who can do drama and comedy,” the former Ina Kapatid Anak director said, even adding that the 43-year-old actress really displayed her “range as an actress” in the film.
Pokwang, for her part, explained that as with other projects, she also made it a point to give her best in this latest offering of hers. "Sinasabi nila na parang last movie ko na [kasi] itinodo ko na," she said.
Celebrity