Jessy Mendiola says she will also try her best to help promote the Philippines abroad. 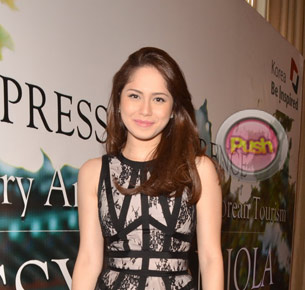 Last October 31, Jessy Mendiola was appointed as an honorary Korea Tourism ambassador by the Korean Tourism Organization (KTO), a government agency dedicated to tourism promotion of the Republic of Korea. Other previously appointed honorary ambassadors include Korean personalities like PSY, Super Junior, and 2PM. The Maria Mercedes star gladly accepted the duty and has already visited the country three times now.
“Kakaiba nga ito sa normal kong ginagawa pero nakakatuwa din kasi nagtaka din ako nung una kung bakit ako pinili pero sabi nga nila because I'm very inspiring, so para daw akong Korea (laughs). I feel happy and blessed and I feel pressured because it's my first time to be an ambassadress of something finally and Korea pa. I love Korea, it's very vibrant, colorful, and also very historical. Ang hirap i-describe ng Korea kasi ang daming dimensions eh. Ang daming sanga kumbaga, ang daming mong anggulong puwedeng tingnan sa kanila,” she said during her presscon held last November 27 at the Manila Peninsula hotel in Makati city.
Jessy admitted that she is excited to attend all the activities lined up for her next year as a KTO ambassadress. “I've been to Korea thrice, but I feel like I don't know much pa. Parang ang dami ko pang makikita sa Korea and three visits aren't enough. You have to go there a lot of times to know more. I think it's really an inspiring country. I've been to Korea and kapag nakapunta ka dun, you are inspired to go again. I would love to visit Korea again. The people there are inspiring. If you would sum it all up and describe Korea in one word, it would be inspiring. They're vibrant, they're historical and they're very nice. I have to go to Korea to see kung anong mga bagong mangyayari dun and then I have to share it here. Basically it's all promoting. Ang saya nga eh, ang sarap maging ambassadress, parang feeling mo hindi ka nagtratrabaho kasi pag andun ka, VIP ka, they give you special treatment but at the same time you learn a lot about Korea. When I promote Korea here, I also promote Philippines there. It's doesn't mean I go there because of Korea, it's also because I go there and I represent the Philippines. Siyempre kailangan ko din alagaan ang image ng Pilipinas so kapag pumunta ako dun sa Korea makikita nila na warm pala ang Pinoy so they should go to the Philippines,” she explained.
During her last trip to Korea last month, Jessy said she saw similarities between Koreans and Pinoys. “We went to a lot of places. When you go to Korea, there are places that are so busy from 9 am to 6 pm, parang dito rin pero sa kanila, pagdating ng 9 am traffic na din. Sobrang busy ng mga tao and the only thing you can do is walk along with them. Kasi sa streets nila they move so fast kaya I think Korea is one of the fastest growing countries in Asia kasi sobrang busy ng mga tao but you can see that they're enjoying what they're doing. You can see that they're happy because when you go there because like for example when you buy food, they smile at you and they make sure that your comfortable where you are. Sa Korea, they want the people to feel important. They're very warm, happy and busy but they also don't forget to have fun,” she added.
The 20-year-old actress said she hopes more Pinoys can visit Korea someday. “I recommend the shopping there to Filipinos kasi meron din silang Divisoria, meron din silang parang Greenhills, meron ding mga high end malls and high end brands. Mahilig din sila sa mga traditional teas. There's this place where they check you and they personalize your teas like sila muna gumagawa nung ingredients for you. They give you the right tea for you, hindi yung usual teas. Kunwari may sakit ka, sila mismo maghahalo ng tea mo with all those ingredients para sakto sa kung ano yung sakit mo. They have a lot of tourist spots like yung tower na sa sobrang taas napagod kaming lahat, sobrang lamig sa taas. Meron silang K-Pop celebrities and boy bands na very nice din, they have their own personalities. I'm sure madaming Pilipino ang in love sa K-Pop, They have K-Pop, shopping, medicine, culture, what else can you ask for? As an ambassadress I will try to promote everything that I can from medicine down to their culture and even the food. The food is very healthy in Korea. Kaya siguro sila mga payat kasi healthy yung mga kinakain nila. Yung food nila merong history, merong meaning and as much as I love the Philippines, I love Korea too, the people and the culture. I've been wanting to visit the country more. I'm really happy, blessed and honored that they've chosen me to be their ambassadress,” she said.
Jessy's special trip to Korea will be shown on Matanglawin on December 1 on ABS-CBN. For more Kapamilya updates, log on to Push.abs-cbn.com and follow Push_Mina on Twitter.
Celebrity