Richard Gomez on continued efforts to help typhoon victims: 'There's no magic pill for that'

Richard Gomez says he and wife Lucy are trying their best to help the people of Ormoc. 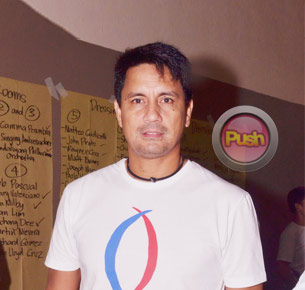 Busy with relief operations in Ormoc with his wife, Leyte Fourth District Representative Lucy Torres-Gomez, Kapamilya actor Richard Gomez admitted that life after Typhoon Yolanda has been a work in progress for the province. The 47-year-old actor was in town to attend a story conference for his upcoming Star Cinema movie with Gretchen Barretto last November 25. “I just came from Ormoc today. Nakisakay lang ako sa eroplano kaya ako nakarating ng maaga. Totoo nag-abang ako sa airport kundi hindi ako makakarating today. Si Lucy mas masipag sa akin doon eh. Tuloy tuloy pa rin yung pagbigay ng mga relief aid sa Ormoc and the district,” he said.
Aside from helping his wife in the relief operations, Richard has also been very active on social media in asking the public for help for the victims. “Soon we'll have to start rehabilitating yung mga nasira na bahay, we'll start helping the people by constructing their homes. Ganun talaga, we just have to stand up from the rubble and move on,” he shared.
Richard said he is looking forward to start shooting the movie next month. “Last time we worked together was a long time ago. Tinawagan siya ng Star Cinema because she was the perfectly cast for the movie. We're very good friends. We'll start shooting at about the same time. We're very excited about this project and we're happy we're doing this together with Star Cinema and ABS-CBN. This is the culminating movie of Star Cinema on its 20th anniversary,” he said.
For the upcoming yuletide season, Richard said it will be a more solemn occasion for him and his loved ones. “It will be a quiet one but of course we will spend it with friends. Siguro we'll be together, the whole family. Pero as early as now hindi pa rin alam kung papaano i-se-celebrate yung Christmas this year,” he admitted.
The talented actor also hopes the country can come together to support the people affected by the tragedy. “With what happened to us, there's no magic pill for that. We'll have to do things one day at a time to rebuild our broken homes. Magtulungan lang tayo, ganun lang. Let's find a good system that will be beneficial to everybody. Kami nagpapasalamat kami sa lahat ng tumutulong lalo na sa ABS-CBN yung mga artista na patuloy na nagbibigay ng lakas ng loob sa mga nabiktima na tinamaan ng bagyong Yolanda. Maraming maraming salamat,” he said.
Celebrity