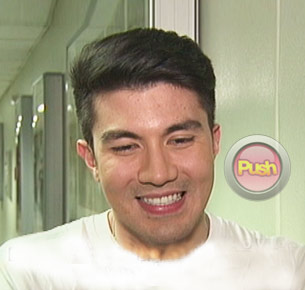 Despite being both available at the moment, ex-couple Luis Manzano and Angel Locsin have both dismissed the possibility of rekindling their romance for the time being.
In an uncanny situation, the former couple are being linked anew since their split in 2009 after they have coincidentally ended their respective relationships only a few weeks apart.
Of late, The Legal Wife star, who is an active volunteer of  Philippine Red Cross, has been busy joining relief efforts for the displaced kababayans in Visayas region after the onslaught of super typhoon Yolanda (international name: Haiyan) last November 8.
"Baka 'yon po ang hindi ko masagot sa ngayon. Sa ngayon po i'm very happy doing what I love most and helping people out," said she via a taped interview aired on Ang Buzz ng Bayan on Sunday.
Angel also added that her love life is her least priority for now.
"Hindi nalang muna ako nag-iisip kasi kakagaling ko lang rin naman po ng breakup so medyo mahirap po ngayon ang sitwasyon," she continued.
Meanwhile, Luis, via a separate interview also aired on Buzz ng Bayan, has opted to keep mum about the issue in respect to Angel and to the other people who might be slighted if he even comments about the matter.
"It's very, very hard to comment on that kasi siyempre may pinagdaanan rin naman si Angel at ako rin and to comment on that siguro it will fuel certain flames na iwasan na siguro natin dahil baka mabigyan ng hindi magandang interpretasyon," said the eldest son of Star for All Seasons Vilma Santos.
What apparently started this rumor was the purported teasing of Queen of All Media Kris Aquino to the ex-lovers during one of the episodes of her show Kris TV where the two guested lately to participate in the relief efforts in Visayas.
To that issue Luis said, "'Yung mga pagbibiro ni Ms. Kris iwan nalang natin doon."
It may be recalled that both Angel and Luis coincidentally confessed the ending of their respective relationships with Phil Younghusband and Jennylyn Mercado recently to Kris TV's head writer Darla Sauler with both of them even asking for the public's understanding if they cannot reveal details as to why the split ensued for now.
Celebrity