Lea Salonga says her tight schedule is the reason why she can't yet commit to The Voice of the Philippines Season 2. 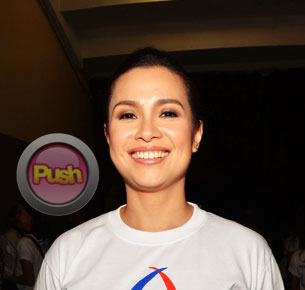 Award-winning singer Lea Salonga had earlier confirmed that The Voice of the Philippines is returning for a second season. "I am informed that for sure there will be a season two. That's a guarantee, that's a ‘for sure,’" shared the Tony award-winning performer during an interview backstage at the recently-concluded Tabang Na, Tulong Na, Tayo Na: An All-Star Benefit concert held at the Araneta Coliseum.
However, what she wasn't sure of is whether or not all her co-coaches and herself included would be returning to the show. "I think that all of us in one way, shape, or form are interested in seeing it happen," she said while adding, "Now we'll see if all our schedules will align perfectly again like it did this year, [then] kami na naman. Kaming apat na naman."
While she knows that no one among the coaches are "indispensable" from the show, she however asserts that, "Dapat kaming apat eh."
In a previous ABS-CBN News report, Lea explained that she wants all of them to work together again because they have already established a "great chemistry" as coaches. But she insists that at the end of the day, with or without them, "The mission of the show is still to find amazing Filipino singers and that still is going to happen."
Does she want be in for the second season? "I want to be onboard!” she exclaimed. “I had the best time being part of it. Ang saya kasi eh, ang saya saya talaga. Oo nga napuyat mga kami, napagod, at inantok. I don't know how many cups of coffee I consumed doing this show but all the hirap was worth it because we found so many incredible people and Mitoy [Yonting] aside, the winner aside, ang dami talagang magagaling na nakaharap namin so hopefully we're asked again and we get to be part again of this amazing, amazing journey," the critically-acclaimed Broadway actress said.
The Voice of the Philippines first season winner was Mitoy from Team Lea.
But her busy schedule might mean she would have to give up her slot on The Voice. She signed up for a concert tour celebrating the works of Alain Boublil and Claude-Michel Schönberg, the winning team behind Les Miserables and Miss Saigon, that she would be headlining along with West End theater star Michael Ball. Titled Do You Hear the People Sing?, the tour is slated to kick off in the Asia-Pacific region this month. Then Lea has her Broadway comeback next year through the musical Allegiance, which was developed by Star Trek's George Takei.
Meanwhile, in a separate ABS-CBN News report last month, PopStar Princess Sarah Geronimo has confirmed that she will be returning as a coach for season two.
Celebrity