Pascual says he'd rather not place himself in a situation where people would just stir up controversy. 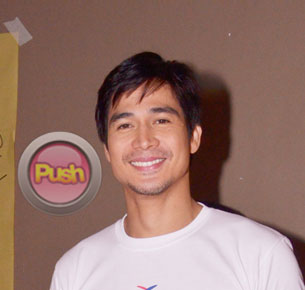 As one of the most celebrated actors of his generation, Piolo Pascual is not one to play roles that are too controversial for his taste. For instance, there is the growing trend in mainstream and independent scenes to focus on gender-centered themes where straight actors taking on gay roles.
"Siguro hindi naman ako tanga para ilagay ang sarili ko sa sitwasyon na pagtatawanan ako at pag-iisipan ako ng hindi maganda," Piolo said during the press conference for his Sunpiology Fun Run, which will happen on November 23 at the Bonifacio Global City.
According to Piolo, he would rather take on roles that he can ably do “para hindi ko na kailangan ng isa pang intriga para sumikat pa.”
The 36-year-old actor, whose most recent big screen stint On The Job received raves here and abroad, revealed that the said critically-acclaimed film has raised his standards when it comes to choosing a project.
Piolo is currently working on a romantic-drama flick titled Unlove You with actress Toni Gonzaga and director Olivia Lamasan. "Gusto ko piliin 'yung mga trabaho na tatanggapin ko. Actually nagtaka nga ako, 'nung movie with Toni ayaw ko na kasing gumawa ng romcom (romantic-comedy) pero this one naman kasi romantic drama. And how can you say no to direk Olive Lamasan and Toni Gonzaga?" he said.
Apart from the opportunity to work with Direk Olive and Toni, Piolo cited that the fact that the film was under Star Cinema, which is known for coming up with successful films was another reason that got him to say yes.
He noted though that their upcoming film would try "to innovate with the execution" by means of playing around with different camera techniques.
Meanwhile, last month a report in Variety Magazine said that Universal Pictures has optioned the rights to Erik Matti’s acclaimed crime drama OTJ with the remake said to be written, directed and produced by Icelandic filmmaker Baltasar Kormakur and produced by Scott Stuber.
Baltasar is known in the industry for adapting previously written or filmed material in Hollywood. Among his biggest hits are are 2012’s Contraband, a remake of the Icelandic film Reykjavík-Rotterdam, which he himself had starred in, and the recently shown 2 Guns based on the graphic novel series of the same name. “Ang alam ko when they bought it for commercial distribution after several years pa bago pwedeng i-remake. Ang alam ko nasa contract ‘yun,” he shared.

Is there any update as to who would take on their roles, like his NBI agent Francis Coronel, Jr.? “Well the agency told me that Tom Cruise was interested pero hindi natin alam ‘yun eh sila Direk Erik na ‘yon eh pero definitely these are Hollywood stars,” he assured.
Would he approve of it in the event that his character would be given to the Mission Impossible star? “Anong karapatan ko, Tom Cruise ‘yun eh. Why not ‘di ba?” he quipped with a laugh.
The actor remains overwhelmed by the idea that their film would be remade abroad. “We’re thankful but of course I hope it doesn’t end there. It’s one way of showing the international market that we have what it takes to show them our films that are world-class as well. But it begins here eh, I hope there will be support from the audience for the next films na katulad ng OTJ na matapang na pinalabas kasi we deserve to see something like it,” he said.
According to Piolo, the support of fans is very vital in coming up with fresh films that tackle uncommon topics like OTJ “kasi if you get to see the same genre, the same forte, the same film every time hindi tayo mag-go-grow as a film industry.”
Celebrity