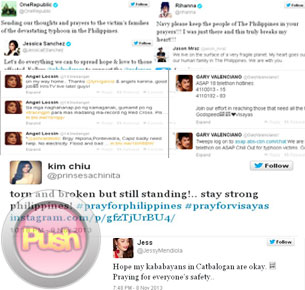 It's times like this when celebrities join forces and utilize their influence to gather relief for people in need. After Typhoon Yolanda hit the Visayan region and left a catastrophic aftermath, celebrities take on the role as volunteers and advocates of help for the victims.
In this digital age, local and international figures use social networking sites like Twitter and Instagram to send their messages of hope to the victims and plea for donations from the citizens in the country and around the globe.
Our very own Kapamilya stars like Anne Curtis, Kim Chiu, Pokwang, Paulo Avelino and a whole lot more took part in helping our kababayan in Visayas via the online world.
Angel Locsin tweets how to locate family members via Red Cross
Anne Curtis thanks those who joined her garage sale last Sunday in Market-Market. The proceeds amounting to 370,000 php will go to World Vision Philippines. Paulo Avelino tweets how to help via World Food Program

Jessy Mendiola hopes our kababayans in Catbalogan are alright.

Eric Tai tweets a map of the Visayan region which is immensely affected by the recent typhoon.

Kaye Abad tweets the numbers to call to give donations.

International stars like Rihanna, Jason Mraz, David Archuleta and Jessica Sanchez who held concerts in the Philippines also tweet their heartfelt messages for the Filipinos. One Republic, The Script, Jared Leto, Pitbull and Sandara Park post their messages of hope and love for the Philippines. Pope Francis urges everyone to join him in prayer for the victims of the typhoon. CNN reporter Anderson Cooper is reported to be in the Philippines to cover first-hand the aftermath brought by Typhoon Yolanda. His coverage will air in CNN’s AC360.
Celebrity