Kim Jones on Jericho Rosales: 'I'm excited to be married to him already” 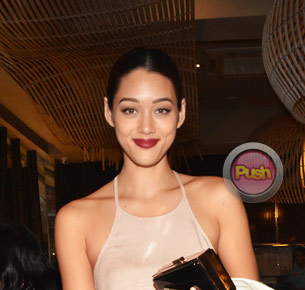 Kim Jones was all smiles when she graced the red carpet premiere of Jericho Rosales’s critically movie Alagwa last October 7. In an interview with the Filipino-British beauty, she relayed how proud she is of Echo. “I am so happy. I am very, very proud [of him]. It's a wonderful film and I’m so excited for everyone to finally see it.”
When asked if there is any plan to star in a movie together, Kim shared, “We thought about it and it would really be fun and if given the right opportunity and the right project, yeah definitely."
On their upcoming wedding, the TV host stated that they are already in the preparation stage. She remarked that she’s already looking forward to be married to the love of her life. “Honestly, it has gone by so fast and it's exciting to start planning, we've continued planning already. I'm excited to be married to him already,” she said. She added that she’s also ecstatic to say her wedding vows. “I think what I'm most excited is saying my vow. I'm already starting to think about my vows and I'm going to try memorizing so I can say it well.”
Kim remarked that she’s blessed to be engaged to Echo and that she is thankful for having such an amazing man in her life. “I am extremely blessed. He is such a great man. He is such a loving man and he's funny and everything and I really felt that he is God's greatest gift to me. I'm very, very glad to have him.” She also relayed that what she loves the most about the actor is his sense of humor, saying, “He is the perfect end to a stressful day.”
Is there any pressure to have the wedding sooner? “No, not at all. We want to get married soon, but I'm just excited to be newlyweds, to be a married couple, things like that. It's definitely going to be at the beach and it's definitely going to be a wedding where a lot of friends and families are coming,” she said. Kim was mum about the date of the wedding.
Did she ever expect that she would be married to a Filipino? “Nope. I thought I was going back to Australia and then I fell in love.” On how they have kept their relationship strong, Kim shared, “Our faith in God, because God is our rock. He is the center of our relationship,” she said.
Celebrity