Richard Yap says his wife is not overprotective

Richard Yap says that wife Melody is not overprotective of him at all. 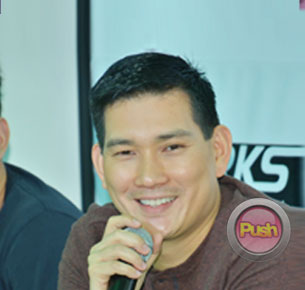 On the issue that his wife is overprotective, Richard Yap clarified that it is not true. “You can’t control what other people will think pero alam naman ng mga tao sa industriya na hindi totoo ‘yun,” he remarked.
He added, “Actually hindi na siya sumasama sa akin sa taping so ano lang pag may occasion lang na ganito (pertaining to his album launch last week).”
He revealed that without his wife, he could not have entered show business. “Well kung hindi dahil sa kanya wala ako dito kasi tinanong ko siya nong una kung okay lang sa kanya na pumasok ako sa show business and she said why not.”
Now that he’s already a recording artist, Richard shared that among the female artists in the country, he would like to collaborate with Lea Salonga if given the chance. “It might be Lea Salonga. Well, she’s one of the most acclaimed singers in the country, marami namang iba pero I look up to Lea Salonga for all that she's accomplished,” he shared.
On his acting career, ‘Ser Chief’ is pretty much contented with what he has achieved so far through his hit teleserye Be Careful With My Heart. “So far may nakukuha naman kami [na awards] so you can really see that it’s worth it. Hindi ko na pinapangarap na magkaroon pa ng ibang award. If it comes, it comes, pero kung hindi na, okay lang,” he said.
Since he’s now very popular among the masses, is there any plan to shift into politics? “Actually wala pa akong iniisip na ganon kasi iba ‘yun eh. I have no time for that. I guess I can take the job as an actor but as a public figure hindi na muna kasi medyo private talaga akong tao even before.”
On the issue of the pork barrel scam which made major headlines in the country recently, Richard also shared his thoughts about it. “Of course I’m just angry, tayong lahat nagbabayad ng tax tapos sila kung saan-saan lang nila ginagamit di ba? So I think all the Filipinos have the right to get angry and to get mad on all these politicians who are wasting our money because the Philippines is a rich country and we have all the natural resources. We could see  they are spending billions di ba every year, we could put all that to good deeds like by putting infrastructures, health care education, they could all put it into that instead of putting it in their pocket,” he stated.
Celebrity