Jed Madela admits he sees the rise of numerous new artists in the industry as a challenge to improve himself. 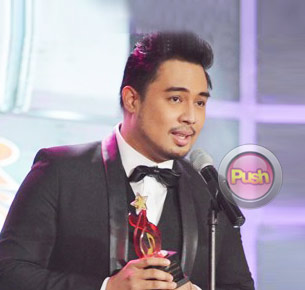 Jed Madela admitted that he almost gave up on his dream of becoming a professional singer when he was still starting out. But according to him, he was fortunate enough to have people in his life that supported him throughout his journey as an aspiring singer. “I started in a band, just a small band, so siguro the reason why I kept going on was I was lucky enough to be surrounded by people, a very few handful of people who believe so much in me na kahit sinasabi ko na ‘Ayoko na, I want to give up already,’ nandon lang sila at sinasabing ‘Kaya mo yan, it’s just a phase, you know you can push yourself.’”
For the singer, his friends and his management served as his inspiration and strength at a point when he almost lose hope. “They were my strength behind my temporary weakness, my management sila ‘yung naniwala sa akin when I was starting because everybody was like ‘Sino yan?’ It was my managers who really started to push me especially during the times na I thought hindi ko kaya. Sila yung talagang nag-push sa akin.”
Today, Jed is celebrating his ten years in the biz. According to him, his recent album titled All Original is his dream project. “’Yung All Original kasi this came about because for the past nine years that I’ve been in the business, most of the albums na ni-record ko were all covers, so wala talaga akong identity as a singer, so I really push hard na magkaroon ng all original album when I moved to Star Records. I was really happy na they allowed me to record a dream project of mine na all originals.”
Jed is gearing up for a concert this November 15 at the PICC. “The concert will be a celebration of my ten years in show business so expect songs that are very identical to my life. There will be a part that I will be telling stories through songs and there’s going to be a part that will showcase my ability as a performer from all genres so I’m so excited.”
Jed has definitely established a name for himself in the industry but with the numerous new artists today, is he threatened that they will soon be stealing the spotlight? “To say that I’m not threatened that would feel naman na ang yabang nito. Threatened would be such a strong word, probably challenged. Siyempre ang daming magagaling ngayon, ang daming sobrang galing na artists na lumabalas ngayon like si Mitoy (Yonting), si Radha (Tinsay), sobrang galing. Of course it’s always a wake-up call for us artists na kinakailangan maging handa kasi anytime anybody can take your place. I’m just lucky siguro kasi isa ako sa mga nauna, kami ‘yung mga naunang balladeers na naka-establish na rin ng pangalan namin but it’s not enough for us to sit and enjoy what we work for, kailangan it’s a constant process. It’s really hard work,” he said.
Celebrity