Chris Hemsworth comes back as Thor

Thor: The Dark World opens in Cinemas on October 30, Wednesday. 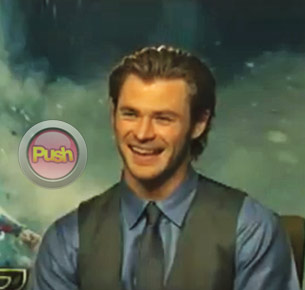 While Chris Hemsworth recently received rave reviews for his role as a car racer in the movie Rush, he is still best known for playing the hammer-wielding Marvel superhero Thor.

In his interview with TV Patrol Hollywood correspondent Yong Chavez, Chris recalls how he wasn’t always that popular and how getting a break in Hollywood hasn’t been that easy. “It’s been six to seven years of auditioning and working little bits but most of the time the door bangs down [on me]. But you know, I just try to keep coming back. There were plenty of periods when I was about to get back on the plane and head back to Australia and leave Hollywood. I’m glad I didn’t, I’m glad I stuck with it.”

And now that he’s once again playing the wide-shouldered superhero in the sequel Thor: The Dark World, Chris is happy that this time his character shows more depth. “In the first film, he was the image of an angst-y, arrogant teenager and in this, we see more battles won and [we see] a mature version of him.”

Thor: The Dark World opens in Cinemas on October 30, Wednesday.