Phil maintains that he and Angel parted ways as 'friends' 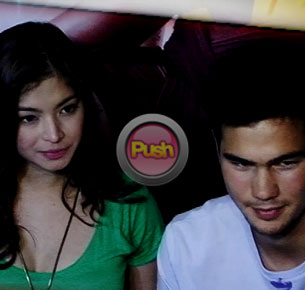 A couple of days since his now ex-girlfriend Angel Locsin revealed their breakup, Azkals team captain Phil Younghusband took to his Instagram account on Sunday to say his piece on his shocking split with “The Legal Wife” actress.
He underscored that despite the separation, he and Angel are still good friends.
“Although we have parted as a couple, we are thankful that we remain friends and we only wish the best for each other,” he wrote.
According to the Filipino-British striker, there was nothing to regret about their almost two-year “happy” relationship for “we enjoyed each other’s company and really made the most of it.”
However, as much as they tried to make things work for their relationship, without divulging the true reason of their separation, Phil said that parting ways was the best choice to make.
“There are no faults in this, it was not an issue of who did or didn’t do something, it was a mutual decision and although it was difficult we just both felt that this would be the best thing to do given our circumstances,” he wrote.
More he requested for understanding from their followers for this “sensitive matter.”
“I personally apologize for [not] taking time to let everyone know about the situation. I am grateful for your support and we hope you continue to support both of us in our each of our endeavors,” said he.
Recall that it was Angel who confirmed their split via a statement sent earlier to “Ang Buzz ng Bayan” head writer Darla Sauler which was later on published at DarlaSauler.com.
“Sa lahat po ng nagtatanong kung totoo bang hiwalay na kami ni Phil, Totoo po. Sana po maintindihan nyo kung hindi na po namin sasabihin ang dahilan... pero maayos po kaming naghiwalay at mutual decision po ito,” she started.
The 28-year-old Kapamilya star also continued, “Pasensya po kung hindi po kami makasagot agad tungkol sa status ng aming relasyon. Lalong-lalo na po sa mga sumuporta sa aming dalawa. Hindi po namin kayo binalewala... mahirap lang po talaga kung nasa ganitong sitwasyon. Nagulat na lang kami na naunahan na kami ng balita bago pa man kami makapagusap uli. "
“Salamat po sa lahat ng sumubaybay at sumuporta sa journey namin ni Phil. Hinding-hindi po namin malilimutan.”
The two stars’ love affair was one that the public was able to see bloom as it started via Twitter with Phil asking Angel to be his Valentine’s date back in 2011.
Celebrity