Ariella Arida on using a translator: 'I know pagdating ko dun I can do it'

Binibining Pilipinas Universe Ariella Arida is confident that she will continue the winning streak the Philippines has had so far in international beauty pageants. 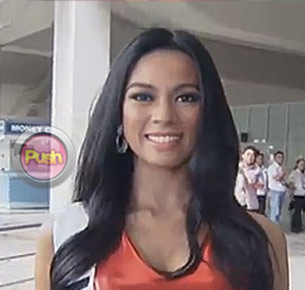 Binibining Pilipinas Universe Ariella Arida is confident that she will continue the winning streak the Philippines has had so far in international beauty pageants.
The 24-year old Pinay from Alaminos, Pampanga is en route Moscow, Russia as of press time to make her mark in the world’s most prestigious beauty pageant. She said winning the Ms. Universe title is her only wish for her coming birthday on November 20.
Two of her competitors for the title, Ms. Gabon and Ms. Canada, have Pinay blood. Ms. Canada is none other than former Pinoy Big Brother housemate Riza Santos.
Ariella is aware of the criticism she gets from social media regarding how she speaks English, but she doesn’t think she will need a translator in the competition. “I don’t mind using [a] translator pero I know pagdating ko dun I know I can do it. I know I can deliver.”
Another fellow beauty queen, 2012 Miss Universe first runner-up Janine Tugonon, is all out in her support of Ariella. In fact, she’s going to watch the competition. Janine, who has moved on from her breakup with JP Santos, confirmed on Twitter that she would be an online correspondent for the Ms. Universe pageant. The pageant will be aired on the Kapamilya network on November 10 at 9 AM.
Celebrity