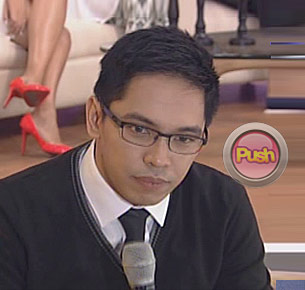 Despite growing up without his biological father by his side, comedy concert queen Ai Ai delas Alas' eldest son Sancho delas Alas feels whole as a person.
On the debut of the new show, "Ang Buzz ng Bayan" on Sunday, hosts Boy Abunda, Carmina Villaroel, and Janice de Belen discussed and delved deeper into the cause, effect, and aftermath of couples' separation, to them and to the persons around them.  Among the matters which they eventually got into was the effect of broken families on the children and among their subjects who spoke about it was Sancho, who himself was a product of a broken family.
According to him, unlike the stories of other children from broken families, he never really felt the need to quiz his Mom about the whereabouts of his Dad.
But an incident in the past has somehow revealed who he was to him, he shared, "May incident lang po na nanonood ako ng TV, sabi ko 'Ma tignan mo itong lalaking ito!' Tapos namumutla siya, 'yun pala 'yung tinuturo kong lalaki was my Dad."
Despite the incident, Sancho shared that it was an aunt of his, whom he didn't name, who broke the ice to him about the identity of his father.
As one of showbiz's most celebrated actresses, it's been part of public knowledge that after Ai Ai's relationship with Sancho's father she got married to former actor Miguel Vera and bore two children with him. They are Sofia and Sean Niccolo Vera.
"Si Papa Migs naman po kasi trinato niya rin po ako na tunay na anak. So kumbaga parang kami talaga 'yung family parang ganon," said Sancho about her mom's former husband.
What did he feel when they too parted ways?
"Never naman niyang [Ai Ai] pinaramdam sa amin na kahit na walang Tatay eh kulang. As in lagi siyang nandoon for us," he revealed.
The most recent relationship of his mother with businessman Jed Salang is one that shocked many for it involved violence which led to their separation a month since they tied the knot in Las Vegas last April.
"Actually hindi ko talaga alam. Nalaman ko lang nung night na ininterview siya ni Tito Boy," he started.
Sancho was pertaining to the emotional, tell-all interview of Ai Ai with Boy for the now defunct "The Buzz" last May where she revealed the straw that broke the camel's back about her marriage with Jed. On top of it, was a purported physical argument which was spawned by Jed's desire to celebrate their anniversary as a couple in a casino, according to Ai Ai.
"So parang ako mixed emotions parang ako, ako 'yung panganay na anak. Ako dapat 'yung dapat na nagpo-protekta sayo tapos malalaman ko na ganito na pala 'yung nangyayari," he said.
It may be recalled that months back, it was Sancho who broke through his Twitter account the alleged involvement of a third party on his mother and Jed's relationship.
Celebrity