Marion Aunor would like to meet her aunt Nora Aunor again and ask her what she thinks of her music. 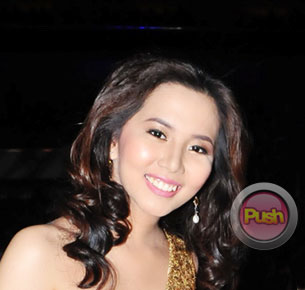 Superstar Nora Aunor’s niece, Marion Aunor, said she is bent on making a name of her own. The 21-year-old singer-songwriter clarified that she is not out to ride on the fame of her Tita Nora. If anything, that’s exactly what she’s trying to avoid.
Without intending to sound cocky, Marion emphasized that she has been using “Aunor” as her last name for as long as she can remember. “First of all, yung ‘Aunor’ naman… it was my grandfather’s and then Villamayor si Tita Nora and then sumikat siya using Aunor. I really hope that people won’t think that ‘Oh she used Aunor because…’ “That’s really what I’ve been using since grade school so hindi ko naman tina-try na gamitin,” she clarified to Push.com.ph and other members of the press during a press conference prior to the launch of her Star Records-released album. Marion’s mom is former singer-actress Maribel “Lala” Aunor.
She could’ve used just her name “Marion,” but according to her having just one name sounds a little “awkward,” so she decided to carry on using “Aunor” for “it sounds better.”
But as an industry newbie, Marion recognized the fact that comparisons between her and her Tita Nora will always happen and for her that’s one of the many tough challenges that she has to weather along the way/ “Oh yes, of course, I mean, she’s a legend. Like, until now ay nagkakaroon pa siya ng awards and I’m just starting out. So, magkaibang-magkaiba talaga po iyong level, ako ay nag-i-start pa lang, eh,” she noted, while adding, “And si Tita Nora, she’s not only known sa singing, but also sa acting.”
Marion revealed that she frst met her Tita Nora when she was five. However, a far memorable encounter happened a little over two years ago wherein she felt the bizarre and inexplicable “Nora magic.” “People are always saying na kapag tinignan ka ni Nora Aunor there’s like a twinkle in her eyes and I know we’re kind of related but meron pa rin talaga siyang impact. Whoah, like movie star,” she blurted in disbelief.
If given the chance though, Marion would love to get to meet her Tita Nora again because she’d “like to know what she thinks about my music.”
Marion and her music
Meanwhile, notwithstanding the fact that she has a singing voice somewhat reminiscent of international soul and blues singer Norah Jones, Marion refused to be boxed into just one genre.
“Like what I’ve said, there is a song for everyone, and medyo experimentation din ‘yung pinaka-theme ng album. Kasi wala rin naman exact genre yung bawat song. Mayroon ditong slow, tapos mayroon kaming medyo mala-Norah Jones, tapos merong parang Jason Mraz. So, hindi ko po talaga mai-de-describe kung anong genre itong album,” she explained.
At the end of the day, the singer-songwriter behind the Himig Handog P-Pop Love Song third winning song “If You Ever Changed Your Mind” revealed that “I just hope that they’ll be able to relate to the songs that I write especially po yung mga ka-age ko.”
Aside from original songs composed by Marion like “Do, Do, Do” and “Fallen Much,” her album also includes collaborations with Patricia Sanico for “Sex On Legs” and the legendary Vehnee Saturno for the song “Take A Chance.”
There are also covers of popular hits like Pink and Nate Ruess’s “Just Give Me A Reason,” Allona’s “Someone’s Always Saying Goodbye” and classics like David Soul’s “Don’t Give Up On Us” and Lisa Angelle’s “The First Time I Loved Forever.”
“Actually at first I really wanted to release an all-original album kaya lang ‘yun laging sinasabi nila baka ‘di maaabot ng ibang people… Ginawan ko na lang ng sarili kong version, tin-ry ko talaga na ibahin ‘yung sound [nung remakes] para hindi ma-compare sa revivals,” she confessed.
The budding singer also added, “… Hopefully kapag mas matagal na ako sa industry makapag-release na ako ng all-original. So I’m excited for that.”
Marion Aunor’s self-titled debut album released by Star Records is now available at all record bars nationwide for only P250. Digital tracks can also be downloaded via iTunes, Amazon.com, and MyMusicStore.com.ph.
Celebrity