Sir Chief on staying in showbiz: 'Many people want the opportunity but are not given it so here I am, why should I waste it?' 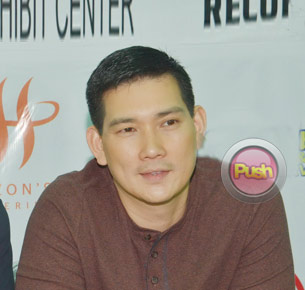 "Since I'm already here, I might as well take advantage of where I am right now and make the most out of it. I guess as long as there's still the need for me to be here, why not?" Richard Yap said during a recently-concluded interview at his GAOC Dental photo shoot.
According to Yap, he is not the type to waste an opportunity that "many people want." Moreover, he added that what's bolstering his desire to stay in the business was his wife's unwavering support.
"Yes, of course. She's very supportive. There's really no problem with her, kahit na kung ano 'yung scenes, kahit na kissing scenes, there's no problem with her. I don't have to tell her about it. Malalaman naman niya eh," he supplied.
But has he established limitations on the future roles that he would be taking? "That depends. That depends if it's a good film. But I don't think I'd go for the sexy roles," claimed the 46-year-old actor, laughing.
However, he reiterated that he would openly accept roles that would challenge him and at the same time give him room to showcase something new for the viewers.
"I think it's part of the job. Of course you need to try something different and you also want people to see you in a different light so maybe there are other things that I can do that people don't know also," he replied when asked if he was open to do action films in the future.
Yap, who initially broke into mainstream consciousness by being the commercial model for a popular Chinese fast food chain, has been in showbiz for over two years now. Yet for some reason, notwithstanding his current top-rating soap, a large set of diverse fans, and endorsements left and right, Yap has managed to stay off of the media radar.
"I'm basically a very private person. I don't like drawing attention to myself. I don't like making press statements just because I'm a public figure, I would just rather do my job and stay in the sidelines," Yap explained.
What has he deduced about showbiz so far? "Showbiz is like any other business. There are people who are good, there are people who are bad. There are people who would want to pull you down. There are people who would want to help you up. So it's up to you to take care of yourself and find out who the right people you should be with," summed up the leading man of actress Jodi Sta. Maria on Be Careful With My Heart.
Putting on once again his marketing executive's hat, the Cebu-bred star confessed that his off screen profession has truly helped him heaps in building his "brand" saying that, "You have to build upon your brand and the brand that's here is me. So you have to take care of that brand, you have to market it. Then you have to give people something different every time so they'll keep on coming back for more."
Summing it up, he underscored that so far all the glitz and glam that comes with being part of the Tinseltown has not changed him as a person in any way. "I still think I'm still the same person that I was. I try to act as normally as possible that's why people think in a way I am suplado," he said while clarifying, "But it's just the way I am. I'm not really comfortable with crowds."
Celebrity