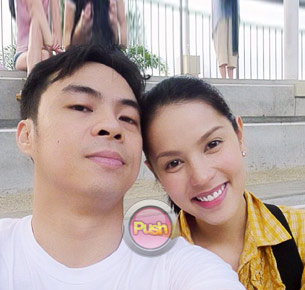 It appears that someone is hell bent in ruining the reputation or the relationship of Chito Miranda and girlfriend Neri Naig.
Despite the ongoing case in finding the perpetrators behind the spread of their first video on the Internet, on Monday, September 30, yet another video allegedly featuring the Parokya ni Edgar frontman and the former Star Circle Quest alumna made rounds anew online.
Running for a total of 11 minutes and 20 seconds long, the current video features a more vivid intimate scene between the couple.
While he has not owned up to this video, in what seemed like a message to the ones spreading videos of their intimate moments, Chito, around 10:30 in the evening also on Monday, posted a photo of him and Neri all smiles on his Instagram account with a meaningful caption that read: “Mahal na mahal namin
ang isa't-isa. The more na subukan nilang guluhin ang buhay namin, mas lalo lang tumitibay ang pagmamahalan at samahan namin.”
Recall that their first sex tape went viral just two months ago with Chito owning up to the “unfortunate incident” and even apologizing to their respective families.
The 37-year-old singer then claimed that his room was ransacked and that among his belongings that were pilfered was his hard drive which many presumed to contain the said private video.
After the incident hogged headlines, Chito immediately sought the help of the National Bureau of Investigation and cited a violation of the Republic Act 9995 or the Anti-Photo and Video Voyeurism Act of 2009.
Meanwhile, Neri for her part took a little while before she broke her silence over the controversy saying even describing her state in a message to The Buzz last August that   she’s “not yet okay but I am getting there.”
The actress however has yet to comment on this new video.
Photo from @chitomirandajr Instagram Account
Celebrity