Sam Concepcion says he wants to build up a career in Indonesia as well. 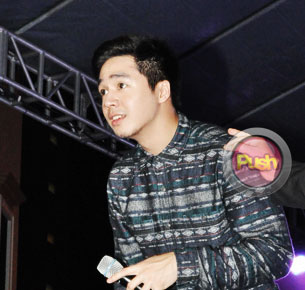 After starring in the first Filipino musical-comedy—the Apo Hiking Society tribute film I Doo Bidoo Bidoo—last year, Sam Concepcion admitted he is looking forward to getting new work started this year. “I’m releasing my album this year. It’s totally different from the way I used to sound. It’s a new sound and a new look for me as a recording artist. That’s one thing that my fans can look forward to. Part of 2013, it will be dedicated to my international career, lots of plans going on in Indonesia for my career there,” he said.
The 20-year-old actor-singer said this does not mean he is trying to copy Christian Bautista’s career path in Indonesia. “Well not exactly because we’re different. Of course, a lot of us local Filipino artists would be happy to be known there. I went there this year (2012) a few times which was great. It was good, they were similar to us, they love music a lot and I love performing there,” he told Push.com.ph.
For 2013, Sam said he is ready to take one more mature roles. “What I loved most about it was I left my teenage years this year (2012). So that’s one of the big things for me that happened. For me, 2012 was a little bit of a big deal. Career-wise, I worked on my album this year (2012) and it’s set to come out next year (2013). I’m looking forward to that as well,” he said.
Does this mean he is ready to take on sexier roles as well? “I guess so because I cant stay young forever. Like as young as I was. Basta age appropriate and all that. I can’t do naman super young roles anymore. I won’t be able to sell that (laughs),” he said.
Sam said he does not mind showing off more skin if the role calls for it. “I guess, it depends on the project. Well for Bench it’s already been possible kasi you can’t be part of that without showing a little skin and thanks to Gold’s Gym also I’ve been working out my body,” he added.
Sam’s top New Year’s resolution is all about time management. “Siguro I want to spend time more wisely this year, to spend less and to save more (laughs). I don’t know. Actually I didn’t know how to gift myself for last year. I don’t really know yet but probably since I’m not very materialistic siguro just time. More time with the people I love,” he said. The talented performer said he is also open to do more theatrical roles if he finds the right project.
When it comes to his personal life, Sam refused to divulge any details regarding his dating status. “Well, I’m happy (laughs).  I don’t know how to answer that question. But my heart? Oh it’s good. It’s happy,” he said. The actor said he has a clear idea of what qualities he wants in a girlfriend. “I just want a girl who is fun, simple, and just very grounded and just focused on what she wants and pursues her dreams. It doesn’t matter if she’s from showbiz or not,” he said.
For more Kapamilya updates, log on daily to Push.com.ph and follow @Push_Mina on Twitter.
Celebrity