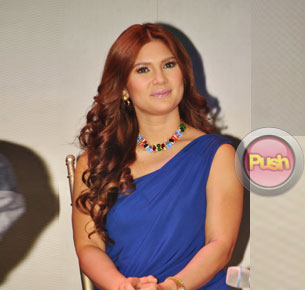 Vina Morales said candidly that like many women, she also dreams of finding the right guy with whom she will spend the rest of her life with. In a recent press conference, the singer-actress was a bit elusive when she was asked if she is currently seeing someone special. “Meron na rin naman pero hindi pa talaga ganun ka-serious, ayoko ng ganon,” she explained.
Vina explained why she was a bit hesitant to answer when she was asked by press people if she is currently dating someone. “Ang sa akin kasi ngayon mahirap sabihin na you’re dating. Sasabihin ko I’m seriously dating. Pangit naman ‘yung ganon tapos it doesn’t work out.”
After much prodding, she admitted that she seeing someone but nothing serious as of the moment. She said that she also has to think about herself. “Di ko naisip na mag-date o magkaroon ng serious man [or] to anyone. Nakatutok ako sa anak ko kasi pinapalaki ko mag-isa. Even though the father is there, iba pa rin ‘yung [may katuwang ka].”
She continued that she sometimes realizes how other people are fortunate to have a complete family, which she also dreams of having one day. “Sabi ko rin one day in God’s time mangyayari din sa akin ‘yan. Kasi alam din naman ng Diyos na ‘yon ang pinagpi-pray ko and kailangan din natin sa buhay ‘yon para ma-inspire. But for now, happy ako sa situation ng anak ko na she’s growing up a good person, ‘yun lang.”
Though she does not mind going out with guys from showbiz, Vina revealed that most of the guys she has been dating lately are not from showbiz. “Kung meron mang darating from the industry, why not? Kasi most of the guys I’m going out with… Ayoko naman medyo exclusive [at this time]. I want to know the person first. karamihan sa kanila non-showbiz.”
Her daughter Ceana is now three years old and Vina said that her father is free to see her any time he wants. “Never in my life na itatago ko ‘yung sa tatay ng anak ko kasi unfair ‘yun sa anak ko. I will never do that,” she declared.
Celebrity