Julia Montes agrees with Enchong Dee's previous statement that it takes two for a relationship to work. 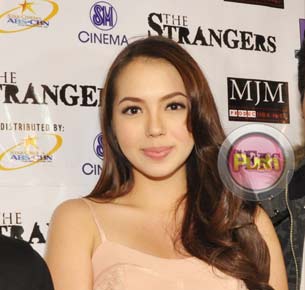 When Julia Montes was asked about the current status of her relationship with Enchong Dee, she vaguely replied, “Okay naman kami.” However, she added that they no longer send text messages to each other.
Enchong and Julia initially started out as friends and were later reported to be dating. Enchong confirmed that while they were more than friends, they were taking things slowly since Julia is only 17 years old.
But during the promotional period of their movie, The Strangers, last December, the two announced that they had stopped going out and were no longer spending time with each other because of their tight work schedules.
When Julia was recently asked if they both firmly decided to sever the special bond that they had established, she replied, “Wala namang dapat... ewan ko kung sino dapat mag-decide [to stop seeing each other]. For me naman kasi wala naman akong nare-receive na text or anything [like] communication, so wala rin akong mabibigay in return.”
When told that Enchong appeared to be more affected than her after the relationship faltered, Julia replied, “Strong lang ako.” Julia was then directly asked if she felt hurt that their relationship was cut short. “Mahirap kasi i-explain. Maraming factors. Hindi naman kasi totally kami. Hindi naman masasabi na hindi [naging kami] kasi ‘yung friendship namin iba rin. Lumalabas kami noon. Nasa malabong stage bilang maraming taong involved,” she explained.
When Enchong’s previous statement that it takes two for a relationship to work was brought up, Julia said that she could not agree more. “Para sa akin effort talaga kasi once na ikaw lang magbibigay ng effort, kapag napagod ka kahit mahal mo pa ‘yung tao or kung sino man importanteng tao sa ‘yo, pag napagod ka wala na talaga.”
She added that to the best of her knowledge, she did her part when she and Enchong were still in constant communication. “Alam ko sa akin ginawa ko ‘yung best ko, hindi ko alam kung... Ayokong magsalita. Basta ako ginawa ko ang dapat kong gawin. For me andun pa sa the best effort ever.”
Julia also shared how she was able to cope with the failed relationship. “Pagod na kasi ako na i-push ang sarili ko sa isang tao na ayaw talaga. Hindi naman sa ayaw na talaga, wala na talagang kahahantungan and for me everything happens for a reason. If hindi, hindi. Lagi kong sinasabi pag friendship matatag, iba ‘yung foundation ‘yun di matitibag. For me kung ang friendship magsi-stay bongga.”
Still, Julia was uncertain if her friendship with Enchong has remained although she suggested that her special feelings for him would not just disappear immediately. As for being ready to be in a relationship, especially now that she is turning 18, Julia said that she is not ready to be in a relationship and would rather take it easy.
Julia also said that Enchong will be invited to her forthcoming 18th birthday celebration.
Celebrity