Erich Gonzales says Mario Maurer and his girlfriend Gubgib made her stay in Thailand truly unforgettable. 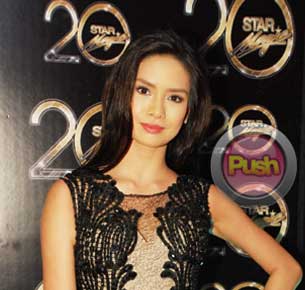 Erich Gonzales shared that she and Mario Maurer are about to finish shooting Star Cinema’s Suddenly It’s Magic this week. The whole experience is unforgettable for Erich because she got the chance to tour different places in Thailand. “We were shooting every day, pero kahit ganon magagandang places ang pinupuntahan namin so libreng ikot na rin. Every time I go there, trabaho rin. So parang libreng pasyal na. We also shot here in Ilocos,” said Erich who looked dazzling in her Francis Libiran gown and own jewelry at the Star Magic ball.

She has nothing but good words for Mario and even his girlfriend Gubgib, who made her feel welcome during her stay in Thailand. In return, she promised to tour them around whenever they plan to visit the Philippines. “Dinalhan ako ni Mario ng upuan nung nandun ako. Basta inalagaan niya ako. Ako din inalalayan ko siya. I met his girlfriend, Gubgib. She's such a sweetheart. I had good company tapos palaging masasarap ang pagkain sa set. So kahit work, it didn’t feel like work at all.” Erich added that the movie will definitely be shown by October or within this year.

After Suddenly It’s Magic, Erich has made a commitment to do another indie film with director Richard Somes. “When he told me about the project, without thinking twice I said, ‘Yes, Direk I’ll do it with you’. Ang alam ko ako pa lang yung nasabihan. Balitaan ko kayo. It’s not horror but I assure you that it’s a promising film.”