Sam Milby says he has no regrets giving up his role in 'The Mistress' to go abroad. 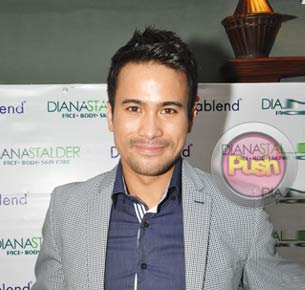 After leaving the country for over three months earlier this year, Sam Milby is back again, working on the much-anticipated Star Magic movie, an indie movie with director Adolf Alix, and the upcoming teleserye Against All Odds with Judy Ann Santos. “Judy Ann is a lot of fun talaga. Sa lahat ng tao sa production, with everyone she’s very nice. I would say nung mga first taping days namin hindi sa hindi ako kumportable, parang nahihiya ako sa kanya kasi siyempre sobrang magaling niya, sa teaser pa lang on-cue talaga yung pag-iyak niya and everything, it’s so good. But I was surprised with how extremely nice she is sa lahat. It’s a lot of fun. She’s just so easy to work with. She has a lot of patience with me. Minsan kahit nabubulol ako, she’s patient with me. Sobrang na-a-appreciate ko yung nakasama ko siya dito sa Against All Odds. I’m doing a lot of effort para maganda yung palabas namin pagdating sa acting,” he said.
The Fil-American heartthrob said he has no regrets leaving the country and risking the public losing interest in him. “Siyempre matagal akong nawala sa primetime and one movie lang ako last year. The thing is, kahit ganun you have to accept that there will be a time na lalo na ngayon na madaming bago. Seven years na this November that I’ve been in show business and I think that’s a big accomplishment already. You have to accept the fact there’s always going to be someone new, someone different. You just have to enjoy what you have, to be the best sa lahat ng mga projects na ginagawa mo and I’m just enjoying,” he shared during his launch as the endorser of the Diana Stalder Face, Body, and Skin Care Center held last September 25 at Mario’s restaurant in Quezon City.
With the decision to pursue a career abroad, Sam had to pass on projects like The Mistress which was originally offered to him. “Yung sa The Mistress, yun ang dapat na role ko and a lot of people feel na nanghihinayang kasi ang ganda ng movie. But ako, I think the experience that I had in the States, I don’t regret it. I think it was something I needed and since I’m still pursuing that, hindi naman parang nag-give up na ako. Three months lang ako dun and that was my initial plan anyway. Tapos pabalik-balik dun. It was an amazing experience and I learned a lot. I’m pursuing it pa rin. Sila dun kasi they’re saying it’s really best if you actually stay here. Ako naman I can’t leave everything here so pabalik-balik naman. And I’m just excited that I went away for over three months and I come back and ABS-CBN is still giving me Against All Odds and a movie din so I’m thankful talaga na seven years na ako sa business and they’re still giving me projects,” he said.
During the trip, Sam auditioned for major US networks like CW, HBO, ABC, CBS, and NBC. “I did a lot of auditions for CW network and that’s the network ng Gossip Girl and Vampire Diaries. It was nice and one of the main reasons also for me to be there and the auditions is para makilala yung mga casting directors kasi importante nga na nakikita ka nila. It’s really nice the amount of feedback that I got from two stations na very interested,” he admitted.
The 28-year-old actor described the audition process abroad as very different from how it done locally. “Mas mahirap talaga eh. Pag may pangalan ka na dito, hindi ka na mag-a-auditions so I was very blessed in that way. But ako I find it to be the right way naman sa States kasi kahit big name ka na, nag-a-audition ka rin eh. The competition is a lot harder there and they make it fair para sa lahat so everyone auditions kahit they have a name na. Siyempre dahil first time ko na nag-a-audition, especially since here I don’t audition, sa PBB (Pinoy Big Brother) lang. Naninibago ako during my first auditions. It was so different for me. Minsan parang papasok ka sa kuwarto tapos yung camera lang andun. Basta they just want to see you act. It’s so different kasi when you do acting, it’s normally a give and take with your co-artist. You feed off what they give. Pero a lot of times, yung kasama mo sa lines, talagang stoic lang, parang you have to see through yourself and imagine na nandiyan ka na sa eksena. Nasanay naman ako after a few [auditions] and that’s when it got a lot easier,” he recalled.
Sam said it was a big decision for him to check out opportunities for him in Hollywood because the timing felt right. “Actually right now, what I heard is lalo na ngayon they’re looking for a lot of diversity in Hollywood and that’s why it’s the best time for me to try to go there and try to make things work there kasi yun ang hanap nila eh, yung Asians. Like Koreans right now sobrang lakas eh, yung Chinese they also had their time so I’m, hoping in some way there’s a lot of half-Filipinos na sikat na dun sa States so hopefully I’ll be one to carry the Filipino flag,” he said.
For more updates on Sam Milby, log on daily to Push.com.ph and follow @Push_Mina on Twitter.
Celebrity