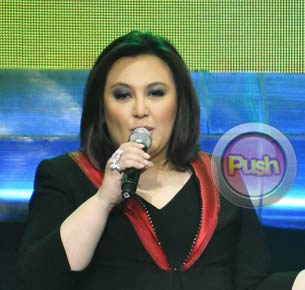 Sharon Cuneta took part in Alay Tawa, a concert tribute to the late Comedy King Dolphy at The Arena at Mall of Asia last Wednesday, September 19. The Megastar shared that she is happy about the event, where three TV networks collaborated and will televise the said event simultaneously on September 30. “Dapat lang because Tito Dolphy belongs to the industry and to the people,” she said.

Sharon was also asked about her daughter KC Concepcion’s new suitor, French filmmaker Pierre Emmanuel Plassart. Sharon said that she knew all the men that KC had dated in the past, but says Pierre is the best guy among them. “I really have to say he’s my favorite. Very, very respectful towards me and Kiko (Pangilinan, her husband).” She continued that Pierre sends her text messages and Sen. Kiko as well. She admired Pierre for kissing the hand of her mom, Mommy Elaine. “When mama’s bored kukuwentuhan niya, very respectful,” Sharon stressed.

She refused to answer when asked about the status of KC and Pierre’s relationship, but she suggested that she approves of Pierre for her daughter, or whatever will make her daughter happy. Sharon revealed that Pierre is spending a lot of time with them.

When prodded to describe how happy is KC now, Sharon shared, “Kasi si KC now is dating. There is no commitment. I think ang anak ko, if anything came out of any heartaches she may have had before from many things, ‘yung she learned to slow down. She values family again and she’s much, much closer to me again now and our family. ‘Yung biglang susulpot ‘yan, biglang da-dive in ako sa kama. Mas matindi [ang bonding]. She always asks for my advice.”

Sharon is also very proud about the good words that KC gets from people she works with. The Megastar said that Martin Nievera, who was also present during the concert, praised KC for her hosting skills on X-Factor Philippines, where Martin is one of the judges/mentors. “Siyempre naman alangan naman di ko purihin ang anak ko, but it’s nice to hear from other people, especially those who work with her,” said Sharon.

She also came to the rescue of her uncle, Sen. Tito Sotto who is being accused of plagiarism after using some parts of a blogger’s article in his speech.  “Sa akin kasi I’d rather focus on I think what he meant. Sa dami ng problemang nangyayari sa Pilipinas, I think we should just focus on… galing sa puso ang message niya. Nagandahan siya dun sa nabasa niya. There may have been some pagkukulang sa pagki-credit pero that’s why you have a whole staff behind you, di ba? Pero let’s just focus na lang on the meaning of what he said.”
Celebrity