Sam Milby is back on track as he gets busy with an upcoming movie and TV projects on ABS-CBN. 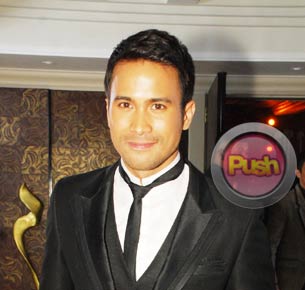 Although he was not originally part of the initial casting for Star Magic’s 20th anniversary movie, Sam Milby managed to snag a role in Crazy Love at the last minute so to speak. Due to some delays, he got lucky and was added to the cast.

His comic team-up with Pokwang is just one of the many interesting subplots in the movie which is scheduled to premiere on November 21. “Ang role ko dito, nag-aaral ako sa States, tapos pumunta ako dito sa Pilipinas. I was really mayabang, feeling parang magiging sikat. Pero magkakaroon ako ng madaming utang sa mga tao so I got stuck here. My character badly needs money and that’s where I end up meeting Pokwang,” he said in an interview with Push.com.ph during their on-location shoot last September 20.

The fact that Sam and Pokwang happen to be good friends off cam made it easier for them to work together. Pokwang for one thing, has no qualms about making overtures towards the dashing actor, albeit jokingly of course. “Actually, yung unang-unang Your Song na ginawa ko, I remember I was blind there. Grabe 2006 pa yun! Siyempre mas kumportable na kami ngayon sa isa’t isa. At saka five years na kaming nagkakasama sa mga Heartthrobs and Teleserye Bida tours abroad. Marami kaming bonding time so naging close naman kami sa mga tours so mas kumportable talaga.”

Sam admitted that he couldn’t help feeling a bit intimidated by Judy Ann’s presence. “Actually, last year I got to hang out with her and Ryan Agoncillo. KC was also there at that time. Nagbonding kami and we became friends at that time. Pero sa set, there are still times na I feel like nahihiya pa rin ako sa kanya. I don’t know why. Pero at the same time she’s very easy to work with. She helps you a lot sa mga eksena rin. Ang galing talaga niya. She has a lot of patience with me so very thankful ako.”

Keep logging on to Push.com.ph for updates about Sam Milby.
Celebrity