Angel Aquino clarifies that her new film is not based on real-life experiences of Ces Drilon. 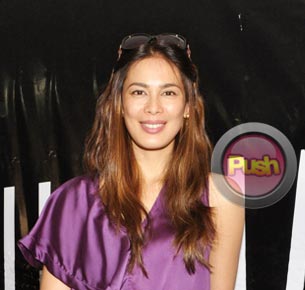 After the success of her horror-suspense film Amorosa: The Revenge, Angel Aquino once again headlines another film with the psychological drama Biktima. She plays the role of an ambitious journalist who leaves her family to do a story on the perilous island of Kamandao where she is thought to have been killed in an ambush. Angel’s husband, played by Cesar Montano, seeks solace in her best friend played by Mercedes Cabral. When Angel’s character resurfaces after some time and finds her husband in the arms of another woman, she goes through a psychological journey that will affect the lives of everyone around her.

“Honestly I don’t know what to expect kasi ang tagal na naming itong ginawa. It was two and a half years ago na tapos nakalimutan ko na siya, wala na siya sa consciousness ko although I was telling my director nga na may mga scenes na very ingrained na in my mind because they were so graphic to me eh. Kaya ayun, hindi ko makalimutan and now it’s all happening, I don’t know what to expect. Hindi ko alam ang kinalabasan ng pelikula (laughs),” she shared.

Angel clarified that Biktima is not based on the abduction of broadcast journalist Ces Drilon in Sulu in 2008. “Kasi nung fini-film namin ito, nangyari na yung kay Ces Drilon but I did ask them and hindi naman daw because when they wrote it, they didn’t have her in mind and hindi pa nangyayari yung kay Ces Drilon when he started writing it. But of course when I was there shooting it, it was Ces Drilon that I had in mind. Parang I wonder how she felt. Ini-imagine ko, alam ko hindi ko pa rin totally ma-e-experience, ma-i-immerse yung sarili ko in whatever happened to her and I will never even come close kung ano yung naging ordeal niya but I hope that I was able to portray well kung ano yung pakiramdam ng isang victim of a hostage, parang yung sa Captive din,” she admitted.

As her character Alice goes through a rollercoaster ride of emotions throughout the movie, Angel said she did not really have the opportunity to thoroughly prepare for the transformation of her role because of last-minute script changes. “You know what happened in this movie kasi, the first time I received the script, it was Cesar’s character that was the main character in the movie in the script that I received. Nung pagdating ko dun, the director talked to me and said they’ve changed the plot. Biglang yung wife became suddenly the bigger character. So hindi ako nagkaroon ng time na mag-research. Pero nung nalaman ko na maki-kidnap ako or ma-ho-hostage ako by terrorists inisip ko talaga si Ms. Ces Drilon, I wonder how she felt, ganun. Pero yung journey of her going through yung psychological trauma, medyo nagulat ako dun and I was placed on the spot. So what I did was intuition na lang, yun na lang ang ginawa ko,” she admitted.