Cesar Montano says his belief in the movie 'Biktima' and its director made him commit to the project. 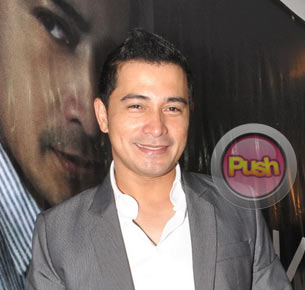 Known for his devotion to promoting his province of Bohol in the Visayas, Cesar Montano once again stars in the upcoming Star Cinema drama-thriller Biktima which was actually filmed over two years ago in the province. Cesar revealed the reason why it took so long for the film to be released. “Matagal in-edit. Nag-shooting kami nito when I was running for Governor of Bohol. Before the elections, so that was in 2009. Matagal na eh. Since palagi akong nandudun, the director took the opportunity of filming me there habang nandudun ako kasi mas madalas ako dun. Wala pa atang limang araw shooting namin.”

The movie shows the travails of a TV reporter (played by Angel Aquino) who sets off on a dangerous trek to the Kamandao island in Bohol and is attacked by insurgents. This leaves Mark, (played by Cesar) her husband, devastated. Thinking his wife was killed, he turns to his wife’s best friend (played by Mercedes Cabral) for solace and love. “Si Angel ang galing niya dito. First time namin ito magtrabaho and I want to do more movies with her. She’s very professional, napakabait. Walang angst at napaka-totoong tao. Napaka-simple pa,” he said.

Cesar’s wife Sunshine is also included in the cast as the boss of Angel Aquino. “She plays the role of one of the supporting characters sa news agency. Angel is working for her. Yung role niya hindi naman ganun ka-meaty pero imposibleng hindi siya mapansin,” he said.