Richard Yap admits he enjoys playing the role of Sir Chief in 'Be Careful With My Heart.' 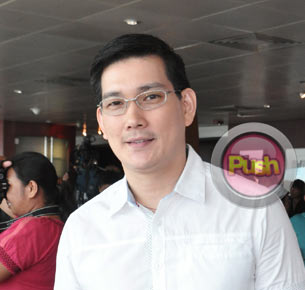 Barely a year after he entered showbiz via the Primetime Bida series My Binondo Girl, commercial model-turned-actor Richard Yap has again been making waves playing the role of rich widower nicknamed Sir Chief in the daytime series Be Careful With My Heart along with Jodi Sta. Maria. The show has become so successful that aside from its weekday broadcasts is a Sabado Rewind starting September 15.

Part of the series success can be credited to the onscreen chemistry between the shows main characters Sir Chief and Maya. “Actually we didn’t expect this talaga. This is the first time we’re working together so nung first kinakabahan pa rin kami, parang it’s really a first for all of us and experimental din yung type of show. We’re just happy that it all came together,” he shared during the Be Careful With My Heart thanksgiving presscon held last September 11 at the ABS-CBN compound.

Aside from the show being extended from its original run, Richard and Jodi also recorded songs for the official Be Careful with My Heart soundtrack which will be released on September 16. “Medyo mahaba-haba pa yung storya so we’ll just go with the flow kung anong ibibigay nila sa amin. We’re very happy that we can inspire people. Yung sa album, wala naman masyadong preparation. Wala naman kasi mahilig lang kami kumanta. Pero ako karaoke, karaoke lang talaga. May duet kami ni Jodi sa album, yung ‘Please Be Careful With My Heart’ at saka yung ‘When You Say Nothing At All,’” he shared.

Richard admitted that the show’s cast and crew are always trying their best to come up with entertaining episodes for their fans. “If possible, we really try to put our best foot forward. Kung anong ginawa na namin before, gusto namin higitan pa. Siyempre we’d like to improve ourselves also para hindi magsawa yung mga tao sa kakapanuod sa amin. So we try to come up with things na are better and better each time that we come out,” he added.

With the show topping the ratings chart, Richard said the pressure is not something they want to think of all the time. “Actually as much as possible, hindi namin iniisip na gusto namin maabot yung ganito. We just try our best, to just give the best in everything that we do just to give the audience a good show. So I think that will take care of the ratings,” he explained.