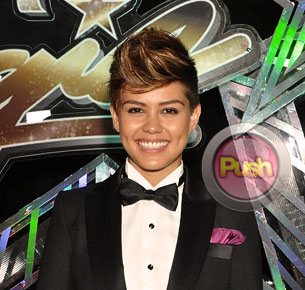 Currently based in Manila, former Pinoy Big Brother Unlimited housemate Divine Smith admitted she is happy to relocate from her home in Cebu so she can focus on building a career in showbiz. The Fil-British beauty was last spotted at the Star Magic Ball being escorted by her good friend and fellow Cebuano Slater Young. The two former housemates were the only couple who walked down the red carpet both wearing formal suits.
Divine said she was happy with the suit that Cebu-based designer OJ Hofer designed for her. “I was so nervous to be there, but also so excited. Everything’s still sinking in and I was excited to meet new people there. OJ Hofer did my suit. I’m actually kind of sick right now, but I’ve been doing some tapings recently which was really nerve-wracking because I don’t really think I’m an actress. It was scary,” she told Push.com.ph.
Divine admitted that out of all their PBB batch mates, it is really Slater she is closest to up to now. “My friendship with Slater, I don’t think it’s changed actually. I think we’ve gotten a lot closer from PBB. He was like my comfort zone in the house. Now naman, we recently did a hosting job. It was the first time for me and he helped me a lot because my Tagalog is really bad so he butts in and corrects me which was good (laughs),” she shared.
The pretty artist said that she tries to spend time with other former housemates as well like Pamu Pamorada, Kevin Fowler, and Paco Evangelista. “Yeah we do hang out occasionally. We go to karaoke and stuff so we still hang out.”
Even though she openly admits to being a lesbian, Divine also shared why she agreed to be Slater’s date to the Star Magic Ball. “Actually it was just for fun. He’s one of my good friends so we just decided to go together, ganun lang,” she said. Despite the clamor from fans of their love team who have dubbed them as “Slavine,” Divine said she is very much still together with her girlfriend right now although she refused to give any additional details about their relationship. “I kind of want to keep it private because our relationship got really blown out of proportion. I think from PBB too many people know about it so I’d like to keep it steady. We’re good,” she said.
When she’s not busy doing work, Divine revealed she loves to do water sports. “I normally go wakeboarding in Nuvali. It’s really fun. I used to wakeboard a lot during my younger years (laughs) when I was with my friends from Cebu. I like the freedom, I feel very free when I’m riding on my board. I also want to try it in Camsur but I haven’t been there yet. It’s where I want to go to next,” she said.
Aside from hosting and acting, Divine admitted that she would like to be able to come up with singing projects as well. “I really want to do more of singing. I would like to make an album. More like pop music, like Chris Brown stuff,” she said.
The 20-year-old former tattoo artist said she is very grateful that her fans are still there for her up to now. “Thank you so much for the support. They really like help us through everything. They’re all amazing people,” she said.
For more updates on the hottest Kapamilya celebrities, log on daily to Push.com.ph and follow @Push_Mina on Twitter.
Celebrity