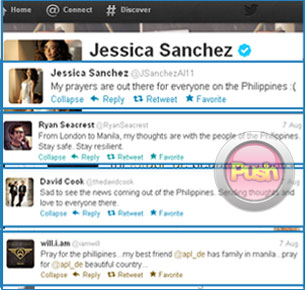 As the country tries to cope with the non-stop rain and floods for the past few days, Pinoys abroad and international celebrities flock to the social networking site Twitter to share their support and admiration for the indomitable spirit of the Filipinos. One of the first to send out a message online was American Idol host Ryan Seacrest who wrote, ‘From London to Manila, my thoughts are w/ the people of the Philippines.Stay safe. Stay resilient.’ Recent American Idol season 11 runner-up Jessica Sanchez also helped drum up support for her kababayans by trending ‘#PrayforthePhilippines.’ Another American Idol alumna, David Cook, who recently performed in Manila a few weeks ago, shared this message to his fans all over the world, ‘Sad to see the news coming out of the Philippines. Sending thoughts and love to everyone there.’
Black Eyed Peas members Apl de Ap and Will.i.Am also helped spread awareness for the country they admitted they love performing by sending these messages respectively, ‘Help me pray for my country,there's a big flood right now’ and ‘Pray for the Philippines... my best friend@apl_de has family in manila...pray for@apl_de beautiful country.” CNN news host Anderson Cooper also reached out by tweeting, ‘My thoughts are with all those in the Philippines dealing with the devastating floods.’
Two international bands, Smashing Pumpkins and Snow Patrol are currently in the country for their one-night only performances. Smashing Pumpkins, which was scheduled to perform August 6, decided to move their show one day later due to weather conditions. Vocalist Billy Corgan was tweeting positive messages all throughout his stay. On August 6, he shared, ‘SP has the best fans in the world and we didn't want anyone taking any chances. Manila you are worth the wait to USB Lots of love/be safe,’ and ‘The safety of our fans is ALWAYS a huge priority. With 24 long hours delay our 1st Manila show will be at same arena, same time.’ On the night of their successful show despite the continuous rains, the Smashing Pumpkins frontman tweeted the following messages, ‘The show goes on! Skies clearing over Manila/our prayers go out to all the families affected by floods. God willing we'll see u 2night!’ and ‘Manila fans, you're the best. Thanks to everyone who made the show possible. Our prayers go out to everyone who has been affected.’
Alternative rock band Snow Patrol is pushing through with their concert tonight (August 9) after arriving in the country last Tuesday. Lead vocalist Gary Lightbody shared his thoughts after experiencing non-stop rains in the city, ‘In Manila. The rain teams. The thunder and lightning still cracks and booms. This city needs the rain to stop right now. Love to all here.x’ and ‘Road hubdeep in rainfall. Our first underwater gig coming up in two days. Good people of The Philippines I hope you're all safe and dry.x.’ The Irish singer showed how affected he was by the calamity by tweeting this message after his performance, ‘Can't sleep. 5am in Manila. Another storm outside! These lovely people need a break for heavens sake. Praying for sun tomorrow.xx’
Celebrity