Gerald Anderson gets praises from fans for initiating rescue operations

Gerald Anderson proves that he is truly a man of action as he braves flood to help victims of devastating monsoon rains. 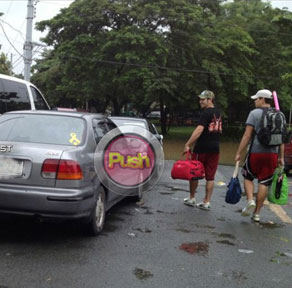 He was admired by many for his heroic deeds during the Typhoon Ondoy in 2009. But this time, Gerald not only braved the floods to help residents in his neighborhood but he also volunteered for the relief operations of Red Cross. He even encouraged his friends from showbiz to ask for more donations for the increasing number of displaced casualties due to the catastrophic monsoon rains recently.
Gerald’s Star Magic handler, Nhila Mallari, also related via Twitter how the young actor immediately responded to her call of help yesterday. Apparently, Gerald just came home from a relief operation when he learned that she needs to leave her house in Cainta, Rizal and go to a safer place. Gerald and his friends didn’t hesitate to come to her rescue.  “I informed him when we were texting kanina and agad agad sabi nya sunduin na nya kami. Thank U Ken, Jalal, Jamil, Dennis for going your way. Malayong paglalakad sa nagmistulang dagat na kalsada. Salamat sa oras nyo at love. Ramdam ko yan. ”
Pictures of Gerald in waist-deep water, helping kids in floating rafts along the way, quickly spread on Twitter. And many of his fans couldn’t help but be amazed with his compassion and kindheartedness: