Sarah Geronimo admits that she was happy to see Gerald Anderson again during a concert for an endorsement. 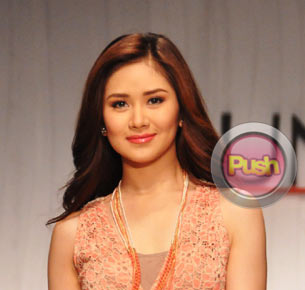 Sarah Geronimo did not deny that her duet with Gerald Anderson was definitely the highlight of her sponsored concert at the Smart Araneta Coliseum last August 18, 2012. They performed the theme of their last movie Won’t Last A Day Without You followed by “We’ve Got Tonight.” “I’m happy. Every time na nagkikita kami natutuwa talaga ako,” she said in a brief interview with the press right after the event.

The audience couldn’t help but get kilig as soon as Gerald showed up on stage during the latter part of the program. After dancing “Teach Me How to Dougie,” Gerald announced that he’ll change into formal attire, fit for his duet with Sarah. Right on cue, the singer-actress came out with Gerald’s blazer and even helped him into it. The crowd further screamed with delight when Gerald kissed Sarah after their first song and before he finally left the stage.

Many believed that the song “We’ve Got Tonight” perfectly describes the status of their relationship. If you recall, their growing romance was put to a halt for some unknown reason. Nevertheless, it’s enough for Sarah that Gerald agreed to do a live duet with her on that special night. “Yes. Actually, nagrehearse na kami the day before the concert. Talagang pinilit ko siya na mag live siya. Sayang naman kasi favorite niya yung song na yun. Gusto ko rin naman yung kanta. So yun, bakit hindi naman natin i-share sa mga tao?”

When told that Gerald claims that she will always be special to him, Sarah remained optimistic about their friendship and perhaps a possible romance in the future. “Oo naman. Alam mo yung friendship namin talaga sana in time mas magblossom pa.”
Celebrity