Khalil Ramos on Kathryn Bernardo: 'I'm always there to help her'

The teen star talks about his friendship with his 'Princess and I' co-star and how he relates to his character 'Kiko.' 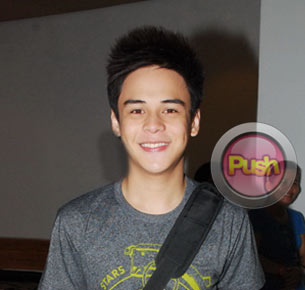 It’s been a year since he did Pilipinas Got Talent but Khalil Ramos admits that singing will always be his first love. Despite getting good reviews for his role as best friend Kiko in the top-rated Primetime Bida series Princess and I, Khalil is excited for his fans to hear the six tracks in his self-titled album. “Right now I’m doing good. I’m very happy. I just finished recording my first album and its coming out first week of August. I’m really, really super excited and I hope they support me. Its my first ever album under Star Records and it’s a mix of alternative, ballad and rock songs,” he shares with Push.com.ph during the Star Magic Games 2012 held last July 29 at the Celebrity Sports Club in Quezon City. The 16-year-old actor-singer participated in the basketball event.

After his acting debut in Princess and I almost four months ago, Khalil admits he has started to become more comfortable with acting now. “Everyone in the show knows that I’m new here in acting and I was really nervous at the beginning but I got the hang of it and I’m happy and now it’s a bit easier. My technique kasi is to connect with my co-actors and actresses,” he admits. Khalil says he has yet to do scenes with some of the veteran members of the cast like Gretchen Barretto and Albert Martinez. “Hindi na naman kinakabahan. I want to get to know the others better, siguro yung mga hindi ko pa nakaka-eksena like Tita Gretchen and Tito Albert, mga hindi ko pa talaga naging close,” he tells Push.com.

Kiko says he also has a good friendship with Princess and I star Kathryn Bernardo. “Well we always hang out. Pagka-standby kami sa set, we talk. She asks stuff from me kasi like lalo na pagdating sa technology. I’m a techie guy kasi and si Kathryn hindi masyado so she asks help from me. I’m always here naman to help her and she’s really, really kind. So far, never kami nag-away, never kami nagkagalit.”

The talented singer says he was surprised that there were supporters of his TV character Kiko and rooting for him to end up with Kathryn’s character, Mikay. “It’s very unexpected. I’m just overwhelmed about that. Kahit na iba iba ang audience naming tatlo ng boys, iba pa rin. I’m really speechless and I’m so thankful to everyone who’s supported me from the start pa lang. I guess because nag-click si Kiko because a lot of people can relate to nafi-feel o nararamdaman ni Kiko so maraming nakaka-relate,” he says. In real life Khalil reveals he can relate to Kiko’s unrequited love to some extent. “Yung ganung kabigat, I haven’t really experienced yet. But of course everyone has had a best friend na crush di ba? It happened to me na pero hindi ganun kabigat, yung kay Kiko kasi masakit,” he admits.

The teen actor says that fans of Kiko can expect him to continue to fight for Mikay’s heart in the series. “Well naman kami talaga napu-push dun pero from what I’m thinking and what I know is that Kiko won’t give up because I know he loves Mikay and he will do everything he can for her,” he says. He hopes fans of the show will not be disappointed by where the storyline will go next. “Lalo na next week, expect a lot of things to happen, a lot of significant events. Maiiyak kayo and kikiligin kayo. I hope they continue to support Mikay’s journey to finding her true identity.”
Celebrity