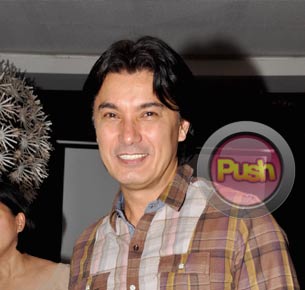 As a devoted family man and husband, Albert Martinez was happy to share good news about the current condition of his wife Liezl who had been battling breast cancer since 2009. “Liezl is as normal as everybody else now. Okay naman kami. So far by God’s blessing, it’s all clear so I’m very, very happy. Dealing with cancer is not easy. It’s a struggle from day one and I’m really thankful na there’s such a thing as stem cell na naging solution sa recovery ni Liezl,” he shared.
The talented actor who is currently playing the role of King Anand in the hit primetime series Princess and I said he did a lot of personal research on finding the best cure for Liezl. “Madami akong pinagdaanan kasi, ni-research ko lahat yan kasi siyempre kailangan malaman natin buo, kailangan aralin mo kung ano ba yung best solution and then ang lahat ng napag-aralan natin, ang ending, pinaka-the best talaga ang stem cell. I took the risk, researched on the possibility of doing it and who is available that can do it and I found out it’s available in Hong Kong, it’s available in Singapore and in reality it’s available here in the Philippines so blessing in disguise, it’s available in Medical City and I met a doctor named Dr. Sam Bernal who opened my eyes and enlightened me about stem cell and tinanggap ko siya and I’m very happy,” he shared.
Albert admitted it has been very challenging for his entire family for the past few years as they helped Liezl battle the illness. “Family support is very important and yun ang nakatulong sa amin to be strong and nagpatuloy to give us hope and then parang maka-recover kami faster yung bonding ng family. It wasn’t easy. It’s not easy na member ng pamilya mo magkaroon ng ganito, kumbaga all of us went through a lot from my kids to myself, all of us who loves Liezl, we went through a lot and we’re so thankful to God na at least we’re almost done or over with that,” he said.
Helping his wife overcome cancer has also helped make their marriage stronger according to Albert, “It’s our 27th year of being together as husband and wife so it made us stronger. At saka it was way, way too painful thinking of the possibility of one day losing somebody you love so much. But then again, we didn’t allow that to control us. We made sure we’re strong and we made sure we were going to fight it. Up to the last minute talaga I was telling Liezl na hindi tayo papatalo dito, kailangan talunin natin.”
Albert also shared that he hopes to work with his wife on the same project again some day. “I’m really happy and I hope so,” he added.
After hearing about Zsa Zsa Padilla’s recent announcement that she has kidney cancer, Albert shared some words of inspiration for his fellow Kapamilya and her family. “All I can say is that I know the feeling, the fear. Don’t lose hope. Find the best way how to handle it and hindi siya end of the road eh. It’s a matter of being strong about it, coming up with a different lifestyle and then kailangan talaga with cancer, you have to face it head on, hindi puwedeng talikuran yan na bahala na. Hindi eh, you have to be very strong eh and fight it head on,” he stressed.
As the Primetime Bida series Princess and I nears the end of its run, Albert shared how thankful he is to be part of such a successful production. “Nagpapasalamat ako sa lahat ng bumbuo ng cast and crew and staff ng Princess and I kasi lahat ng tao dito really worked hard and are passionate about the project. I’m so thankful and nagpapasalamat nga ako sa ABS-CBN kasi hindi nila ako pinababayaan and binibigay nila sa akin yung projects na talagang worth doing and I’m really, really proud to be part of the team. Kailangan abangan natin kung finally makikilala na rin ni King Anand ang kanyang pinakamamahal na prinsesa. Yun din ang inaabangan ko,” he said.
The 49-year-old actor also praised the young stars of the show, namely Kathryn Bernardo, Enrique Gil, Daniel Padilla, and Khalil Ramos. “I’m really, really fortunate na makatrabaho sila dahil sila hard-working at naka-focus sa trabaho nila and it’s really fun and easy to work with them,” he said.
For more updates on Princess and I, log on daily to Push.com.ph and follow Push_Mina on Twitter.
Celebrity