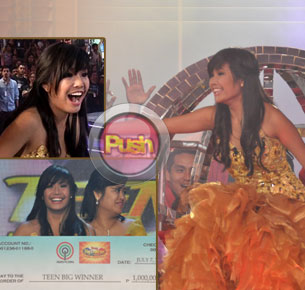 After 13 weeks of staying inside the Big Brother house, cosplay cutie from Ilo-Ilo Myrtle Sarrosa bagged Pinoy Big Brother Teen Edition 4’s Big Winner title. With a runaway net percentage of votes (33.91%), the 17-year-old could not believe she was the last teen standing as Toni called on her name last during the Big Night held at the Malolos Convention Center.

Myrtle, as this season’s winner, took home one million pesos, an Asian tour package plus gadget and appliances showcases. She was welcomed to the outside world by her parents and supporters who were even in cosplay attire.

The BFF at the Big Night were attended by Kuya’s ex-teen housemates from the current and last three seasons of the show. First Big Winner Kim Chiu was also present to lead a special dance number.
Celebrity