Jodi Sta. Maria to her future boyfriend: 'Please be careful with my heart'

Jodi Sta. Maria keeps mum about her love life, but agrees that she'd be more careful the next time she falls in love again. 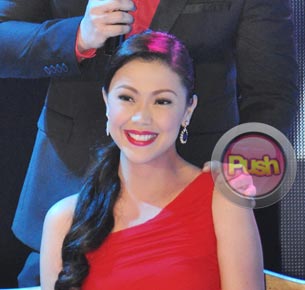 Despite persistent rumors linking Jodi Sta. Maria to a former co-star, she refused to say if she’s open to dating ever since her separation with husband Pampi Lacson two years ago. She insisted that she’s happy with her “life in general,” without giving details about her love life. She agreed, however, that she’d be more careful the next time she enters a relationship. “I think. After everything that I’ve been through, siguro kung sino man next na darating sa buhay ko, may karapatan akong sabihin please be careful with my heart,” she said during the grand press conference of her latest series, Be Careful With My Heart, Tuesday, July 3.

In Be Careful With My Heart, Jodi plays Maya Dela Rosa, a hard-working girl who’ll do whatever it takes to provide for her family and achieve her dream to become a flight stewardess. Along the way, she is forced to take on different odd jobs until Richard Lim (played by Richard Yap) offers her a job as his daughter’s nanny. “Probinsiyana siya. Very positive outlook niya. Sa kanya walang imposible, lahat ng problema pwede masolusyunan. Handa siyang mag-sacrifice para sa pamilya niya na mahal na mahal niya.”

Jodi is happy to be paired with Richard Yap since they’d be offering something new to the Kapamilya viewers. “Nakagawa naman ako ng love stories before. Nagkaroon na rin naman ako ng love teams. Pero this time, hindi siya heavy drama, light drama na may situational comedy. So it’s exciting to see how the viewers will respond to my on screen team-up with Richard.”

Be Careful With My Heart premieres on July 9, before It's Showtime in ABS-CBN’s Prime-Tanghali.
Celebrity