Dolphy's early years in showbiz: From vaudeville to a certified movie star

A sickly child with an inferiority complex, Dolphy has proven how hard work and passion for his craft led to his success as the country's one and only Comedy King. 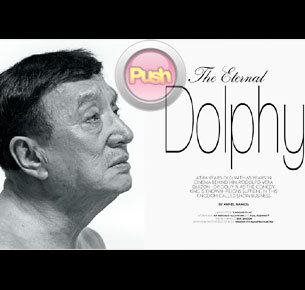 It was his love for the movies of Hollywood’s pioneer comedians which provided him an escape and a constant source of entertainment throughout his childhood. “Mahilig ako niyan. Mula pa noong Three Stooges, Chaplin. Naaaliw ako talaga. Maski iyong sakit ko, nawawala kapag nakakapanood ako.” Little did he know that show business would also become his life-long passion in the years ahead.

During the Japanese Occupation in the country, Dolphy and the rest of his siblings were forced to earn a living as their father Melencio Espino Quizon (a Filipino with Spanish and French blood) couldn’t work and had to take refuge in a bolt-hole in their home built by his mother Salud dela Rosa Vera (a Spanish mestiza) for fear of being caught given his seemingly American features. Dolphy found various odd jobs, from being shoeshine boy and coachman to garments factory worker and stevedore at the pier.

His sister Corazon found work as a chorus girl at the Avenue Theater on Avenida, Rizal. The then 16-year-old Dolphy was tasked to bring her food everyday, until such time he joined the theater group as a chorus boy. “Later binigyan na ako ng solo number. Noong nasama na ako sa Avenue, sa chorus line, mayroon akong kapirasong parte na solo na pam-vaudeville.” But it was while he was working in Alegra Theater, right after the liberation in 1945, that he crossed paths with a group of comedians Pugo, Tugo, Tugak, and heartthrob Fernando Poe Sr.

During the late ‘40s, he first became known as Golay (after the store Golay Hardware in Raon Street) in comedy skits where he played a Chinoy with broken Tagalog. In early 1952, Pancho Magalona, one of the most popular actors in the 1940s, saw his act at the Manila Grand Opera House. Pancho then introduced him to Doc Perez of Sampaguita Pictures, who in turn, gave him the name Dolphy. His first movie under Sampaguita Pictures was Isang Sulyap Mo Tita (1954). He was eventually catapulted to stardom when he played a gay role in the movie Jack en Jill (1954) which also top-billed Lolita Rodriguez and Rogelio dela Rosa.

Dolphy established a name for himself in showbiz during the succeeding years. His first ever TV show in ABS-CBN was Buhay Artista (1964) with co-star Panchito, which was conceptualized by Eugenio “Geny” Lopez and Ading Fernando. At the same time, Dolphy also starred in movies under independent production outfits with films like Captain Barbell and Daigdig ng Fantasia. In 1965, Dolphy finally put up his own production outfit, RVQ Productions, and produced his first film Buhay Artista starring Panchito, Susan Roces, and Ronaldo Valdez, whom he discovered.

Throughout the next 60-plus years, he would be called everything from the local Charlie Chaplin to his nickname Pidol to the one tag that stuck in the public consciousness: Comedy King.

Check out Star Studio Magazine June for the full tribute about both showbiz and personal life of King of Comedy Dolphy.