Metro magazine cover girl Karylle says her stepfather Dolphy has been in and out of the hospital several times in the past. 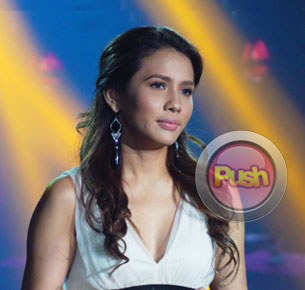 Although it was only recently announced that Comedy King Dolphy has been suffering from a condition called chronic obstructive pulmonary disease (COPD) for quite some time now, Karylle admitted that her mom Zsa Zsa Padilla has always been there to take care of him ever since he was diagnosed.

The Showtime host showed some reluctance in talking about her stepfather, but indulged the media during her press conference as Metro Magazine’s cover girl for their Big Beauty issue in July. “Just to make it clear hindi ako nagbibigay ng official statement. Hindi rin ako updated really and siguro I won’t comment na lang on Tito Dolphy now kasi baka may mali akong masabi. I also get my updates sa news, ganyan. But for my mom, of course it’s nothing new for her. This has been going on for several years and people don’t know about it kasi we were very, very silent about it. People don’t really know that. Siyempre ilang taon na rin siyang may COPD and kailan lang talaga siya naging public and even me I didn’t know what he was sick of for a long time. Minsan alam ko lang na he has pneumonia pero hindi ko alam exactly na COPD. Siguro dahil it’s a medical term na hindi ko maintindihan. Nabanggit pero hindi ko naintindihan. Ang naintindihan ko lang siyempre pneumonia and minsan may carbon dioxide na levels na masyado ng mataas,” she said.

Karylle said that she tries her best to be a supportive daughter to Zsa Zsa and supportive sister to her siblings through these trying times. “Right now siguro it’s not the easiest of times but with the overwhelming outpour of love and support and prayers he has gotten so much better when I first got back and Tito Dolphy was in the ICU. Napakalaki na nung pagbabago niya. Of course my mom, she’s there and andun na yung kama niya. It’s hard for me to see my sisters also very sad and siyempre it’s hard for them. Ako na minsan yung tagabili ng food, sasabihin ko sa kanila na kakain na, papatulugin ko sila tapos babalik na lang ako,” she explained.

The 31-year-old actress-singer also said that there are no regrets that the weddings plans abroad for her mom and tito Dolphy never pushed through. “Siguro hindi na rin nila masyadong finocus yung attention nila on that because siyempre he was focusing on getting better. Everything happens for a reason. Andito na tayo, hindi na puwedeng bumalik,” she added.

Check out Karylle on the cover of Metro Magazine’s Big Beauty Issue. Metro Magazine is published monthly by ABS-CBN Publishing. For the hottest updates in showbiz, log on daily to Push.com.ph and follow @Push_Mina on Twitter.