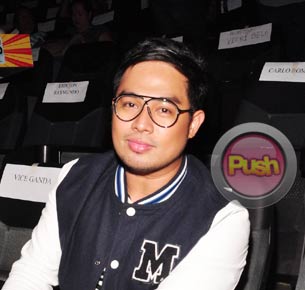 For Jed, one of his dreams is to hold his own solo concert at the new SM Mall of Asia Arena. “I hope, sana. Isa sa mga dreams ko ang magkaroon ng concert dito sa Arena. Next year is going to be my tenth year in the business and hopefully may mga sponsors at saka producers na kakayanain na ito ang venue ko. I’d love to perform here,” he said.

The 31-year-old singer also said it would be a dream come true for him to be able to work with Asia’s Songbird. “I’ve never performed with Regine as a guest sa concert ko. I’ve had Martin, Gary, Ogie, and Lea. I’ve performed with all of them already. Si Regine hindi pa so hopefully sa susunod na anniversary concert ko sana kasama siya,” he added.

After winning the top prize in the World Championship of the Performing Arts (WCOPA) back in 2005, Jed shared why he didn’t just decide to stay in the States and pursue a singing career there. “Nung nanalo kasi ako nung 2005, I was just new in the industry so hindi pa ako that big of a name in the Philippines kaya sabi ko kailangan Pilipinas muna. I decided to go back despite of the offers and managing contract in the States. Bumalik muna ako dito, although andiyan pa rin yung mga offer, and hopefully this year or next year we’re coming up with something international so abangan na lang nila yun,” he said.

Later this year, Jed says he will be performing for one of the charities he supports. “We’re planning for another concert in November and wala pang details but definitely it’s going to be for the benefit of children. May orphanage kami na tinutulungan so towards the end of the year were planning a big concert for that,” he said.

Catch Jed Madela at the Icons at the Arena: Masters of OPM on June 16, Saturday, 8 pm at the SM Mall of Asia Arena. Hosted by Jim Paredes and Pops Fernandez. It will also be directed by Ryan Cayabyab. For more updates on the hottest Kapamilya news, log on daily to and follow @Push_Mina on Twitter.